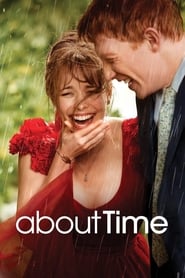 Nobody quite exemplifies that "British Charm" like filmmaker Richard Curtis. But before Curtis stepped behind the camera to direct popular films such as Love Actually and Pirate Radio, he began as a renowned screenwriter more than 20 years ago. His lifelong journey has brought him to his third major motion picture, one that propels Curtis' work to groundbreaking heights. Molding together dramatic heart-filled and heart-breaking elements with an appealing comedic allure, Curtis' newest feature, About Time, is one of the year's finest delights.

After his 21st birthday Tim (played by Domhnall Gleeson) is confronted by his father (Bill Nighy) and informed of a long-time family secret, he can time travel. But rather than using his unique ability for power or wealth, Tim makes his special gift all about love. He packs up his things and moves from the Cornwall coast to London where he meets Mary (Rachel McAdams) and they fall madly in love. However, as time moves along Tim discovers that no matter how rare his gift is, there are things in life even he can't control.

What begins as a quest for love, About Time transforms from an endearing romantic comedy into a sincere and earnest tale about the realities of life. Director Richard Curtis hits the nail on the head and serves up a whimsical story built around fabulous characters thanks to a brilliant collaborative effort from the film's cast. The onscreen chemistry between Domhnall Gleeson and Rachel McAdams sets the table for a whirlwind of emotions, most of which come at the hands of the always amazing Bill Nighy. His supporting turn is the heart and soul of the feature, and one that humanizes a far-fetched and surreal notion such as time travel. Through all the ups and downs, the hurdles and obstacles, About Time reminds us that the adventure of living everyday life is the greatest form of time travel there is.

Although Richard Curtis' wonderful new feature is a tremendous success, many will attempt to thwart its greatest of intentions. Clearly tugging at the heart strings with an outpouring of sentiment, About Time doesn't try to mask its purpose. Rather, the film embraces its emotion and strives to view life in a more vibrant light. Furthermore, the feature walks a very delicate line by using the sci-fi notion of time travel as a backdrop. In doing so, Curtis and company conjure up some clever ideas, yet flaws in their logic are certainly evident. But all in all the feel-good nature surrounding About Time circumvents these bumps in the road, carefully illustrating that Curtis' sentimental approach is all the more worthwhile.

Don't be fooled, About Time exceeds far beyond the "romantic comedy" label. Mirroring our own lives in so many ways, the feature continually grows and expands into something much larger and abundantly greater. And while Curtis' latest effort delivers effective dramatics, you can't take the comedic aspects for granted. The jokes are non-stop and the laughs are plentiful, making About Time a witty and moving film. One that I strongly recommend for all types of audiences to enjoy.