Review | A Field in England
Search 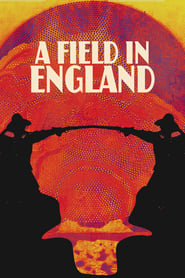 Over the course of history many have argued the purpose of film. It's a very personal and almost existential type of quandary. While artists see filmmaking as a platform for expression and storytelling, I've always believed that a majority of the general public simply wants to be entertained, and very little more. Yet, there's always a small faction of people with a desire to push stylistic boundaries and create something unique. After viewing his latest directorial effort, A Field in England, it's clear that Ben Wheatley is one of those people.

Set against the backdrop of the 17th Century Civil War in England, three men flee from battle into an overgrown field. Not long after, this group of men become overtaken by a devilish alchemist and his sidekick who force them to help locate a buried treasure. Drugged and delusional at the hands of these dangerous captors, everyone begins to question the true meaning of this so-called "treasure".

A mind-blowing combination of unequal parts psychedelia, dark humor and lavish surrealism, A Field in England is by far the trippiest film I've ever encountered. While it's odd in the vein of Stanley Kubrick or David Lynch, and filmed over beautiful landscapes with a keen Malick-like respect for imagery, Ben Wheatley's latest addition falls shy of the great works by these legendary directors. From the post-production standpoint, complements are well-deserved for spectacular editing and photography. However, A Field in England breaks down from a fundamental flaw in its storytelling.

Almost nothing alike, outside of its unidentifiable purpose and cryptic symbolism, I had a similar feeling after viewing the Ridley Scott blockbuster, Prometheus. Perhaps Wheatley and co-screenwriter Amy Jump find joy in crafting a malleable experience that can be molded any which way you desire. On the other hand, this ambiguous product is best suited for niche audiences rather than the general public. While I reserve an appreciation for developing an individual style that demands cerebral rationale and thinking outside the box, such an exposure proves to be a daunting task for the viewer.

Maddening and hallucinatory, A Field in England is captivating and vague all at the same time. Although I'd rather spend my day enjoying a concrete story with a definitive message, Ben Wheatley delivers a thought-provoking and puzzling tale of insanity. With religious undertones scattered throughout the film, there's much to take away from it as long as your willing to make the effort.