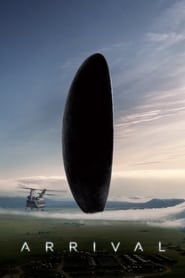 Denis Villeneuve has rapidly emerged as one of Hollywood's most notable filmmakers. Elevating his craft from the ranks of indie filmmaking to mainstream motion pictures, Villeneuve's most recent works include Prisoners and Sicario. This year, however, the director is angling for a clever and artistic entry with his newest endeavor, Arrival, in hopes of capturing some awards season glamour.

Five-time Academy Award Nominee Amy Adams (now, let that sink in for a bit) stars as Louise, a linguistics expert summoned by the United States Military following the arrival of unidentified spacecrafts across 12 different areas of the world. Tasked with making contact and learning the intentions of these aliens, Louise and mathematician Ian Donnelly (Jeremy Renner) try to unlock the secrets of their foreign language before a global catastrophe unravels.

Make no mistake about it, Arrival represents an artsy and cerebral effort merely using its sci-fi backdrop as a portal to its mind-bending story. Eric Heisserer's adapted screenplay delivers second level thinking that highlights a beautiful complexity within the framework of the plot. Yet, unlike ambiguous and open-ended tales of a similar style, Arrival reveals its entire hand well enough to allow the viewer to piece together every inch of its impressive story. Both leading lady Amy Adams and supporting star Jeremy Renner deliver fine performances, and I anticipate Adams being in line for her 6th trip to the Oscar finals.

Despite the film's exceptional cast and wonderfully original story, Arrival struggles to entertain. A sluggish opening struggles to gain momentum as the feature crawls to its powerful third act. Rather than engaging its audience with typical other worldly sci-fi elements, Villeneuve obsesses with a poetic vision that unquestionably looks amazing, yet fails to grab the general viewer's attention. There are plenty of aspects surrounding Arrival that are worth marveling at. However, just be warned that the film is more of a cerebral and tame drama piece than an upbeat sci-fi adventure.