Review | A Walk in the Woods
Search 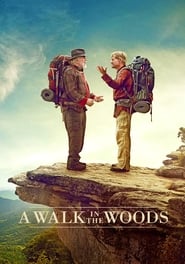 A Walk in the Woods
Movie Critic Dave's Ratings
Stars

In the twilight of his illustrious career, the iconic film star, Robert Redford, has only appeared in four separate roles since 2007. Such a small number would clearly indicate a selective approach for the one-time heartthrob. Hence, it's a bit puzzling what drew Redford to his latest film choice, the old-timer comedy, A Walk in the Woods. Needless to say, even the great Robert Redford couldn't salvage the newest plot-less film from director Ken Kwapis.

As the best-selling American travel author, Bill Bryson (Redford), seeks out the next adventure in his life, he stumbles across the great and lengthy Appalachian Trail. Quickly, the aged writer dives head-first into planning out his 2,000+ mile journey from Georgia to Maine. Yet, the only thing missing is a travel companion. After countless rejections, Bryson hears back from an old friend named Stephen Katz (Nick Nolte) who's willing to join him on the trek of a lifetime.

A Walk in the Woods musters up the occasional laugh, but mainly suffers from poorly developed characters and an unfocused plot. Don't expect any notable character arcs or legitimate dramatic moments. Instead, the film paces along solely as a geriatric comedy drowned in predictable situations and unoriginal jokes that produce soft chuckles, but never full on riotous laughter. As A Walk in the Woods meanders from one rehashed joke to another, the most disappointing aspect of the film is its untimely and abrupt finale that ultimately reinforces the notion that the feature is nothing more than a thoughtless and misguided attempt at storytelling.

Although A Walk in the Woods suffers from numerous inexcusable mishandlings, it's impossible to deny the onscreen efforts of co-stars Robert Redford and Nick Nolte. Without these seasoned vets who try their hardest to resurrect a dead story, the film would have been an absolute disaster. Thankfully, the committed work of Redford and Nolte help ease the audience through a journey of recycled humor and an even flimsier screenplay. But all in all, A Walk in the Woods is a mediocre comedy with almost no redeeming qualities.

As a result of poor storytelling and a lack of creativity, Ken Kwapis' latest endeavor comes and goes without ever leaving a mark. Perhaps Redford is a devoted fan of Bill Bryson's highly regarded and humorous novels on world travel. Otherwise, it becomes difficult to fathom what attracted him to a script that's so unapologetically devoid of emotion. A Walk in the Woods is undeserving of your hard earned money and far from the summertime adventure you should be seeking out.