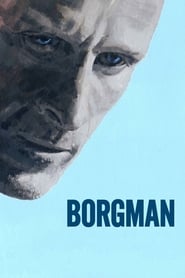 As a Spotlight Circle member of the Philadelphia Film Society, the same group responsible for running the city's annual film festival, I've had many opportunities to discuss the selection process with various board members. They literally search the globe for the most enticing and unforgettable films, in hopes of compiling the strongest collection of movies possible. Last year, the Philadelphia Film Festival selected a dark and disturbing feature out of the Netherlands called Borgman. Although I missed a chance to view the movie last October, Borgman's finally making its way to the art-house circuit in limited release.

Jan Bijvoet stars as the title character, Borgman, a vagrant chased from his crafty underground dwelling by a priest and a team of hunters. The homeless man wanders off to the lavish residence of a wealthy family asking to use their bathing facilities in order to freshen up. This leads to a severe altercation between a battered Borgman and the patriarch of the family. Feeling guilty for her husband's actions, Marina (played by Hadewych Minis) secretly provides food for the vagrant and allows him to take shelter in their unused guest house.

Director Alex van Warmerdam creates a surreal examination of evil in an innocent suburban setting. By allowing this drifter into her home, Marina and her family begin to experience dark psychological nightmares that drive them to the brink of madness. Somewhat reminiscent of a recent foreign film out of Greece called, Dogtooth (which is far more over the top and bizarre than this newer title), Borgman delivers a captivating and haunting experience through a crawling 113 minute journey into the face of evil. Although it becomes virtually impossible to turn away or even lose interest in Borgman, its greatest disappointment lies the fact that this slow-building film culminates in anti-climactic fashion. With this self-motivated and demonic figure tearing apart a seemingly perfect suburban family scene after scene, an unsatisfying resolve consequently remains as the feature's lasting impression.

Don't be fooled, however, because Borgman has many redeeming qualities that make it a sure-fire successful indie art-house film. Wonderfully shot and edited, Alex van Warmerdam's effort is fundamentally sound. And on top of being a well-made movie, Borgman benefits from a wide collection of prominently-acted roles. Both Jan Bijvoet and Hadewych Minis give worthwhile character-defining performances that add to the feature's escalating tension. But all in all, no matter how sturdy a foundation, Borgman is unable to escape an undeniably flat finale.

Eerie, creepy, peculiar and off-beat, there's no shortage of words to describe the latest Drafthouse Films release, Borgman. A niche audience of cinephiles will certainly rejoice over this fine-tuned example of modest filmmaking. Yet, based on story and poor pacing alone, the average movie-goer should probably look elsewhere.