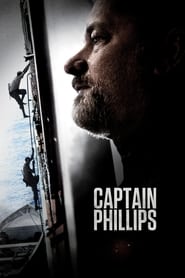 It's been more than a decade since Tom Hanks has landed a swoon-worthy kind of role for the Academy to recognize. With back-to-back Oscar wins in the Best Actor category for marvelous performances in Philadelphia and Forrest Gump, Hanks spent much of the 90s and early 2000s nestled comfortably at the peak of the awards season mountain. The brilliant artist returns in 2013 with a pair of highly anticipated true-story roles as Walt Disney in Saving Mr. Banks and Paul Greengrass' self-titled Captain Phillips. As it appears, the stars have aligned once again and Tom Hanks is finally back atop the proverbial mountain.

Richard Phillips (played by Hanks) is a hard-nosed and dedicated Captain of the cargo vessel Maersk Alabama. On a typical voyage to deliver food and supplies around eastern Africa and the middle east, a band of Somali pirates hijack Phillips' ship and unarmed crew. Desperate to keep himself and his team out of harm's way, Captain Phillips demonstrates remarkable heroics throughout this trying ordeal.

Relentlessly tense and nerve-racking beyond belief, action guru Paul Greengrass summons one the most suspenseful movies of the year. Captain Phillips is a lengthy journey filled with highs, lows and just about everything in between. But rather than catering to an all-too-easy "good vs evil" approach implemented by many run-of-the-mill directors floating around Hollywood these days, Greengrass and writer Billy Ray mold together an honest and multi-layered film. Not only does Captain Phillips venture through the minute-after-minute terror experienced by the hijacked crew, the feature also dives deep into the desperate mindset of the vessel's captors. The ambitious attempt to witness the entire story surrounding this historic event allows Captain Phillips to develop into a more authentic and believable thrill ride.

Despite crafting a captivating and gut-wrenching encounter, Greengrass misses the mark on a few key areas. For starters, the well-rounded director over-extends every single aspect of the film. He could have easily attained his goal by cutting many of the feature's scenes in half. Whether it's the intense bickering and power struggle between the pirates or the Red Light/Green Light back-and-forth by the Navy Seals team near the film's conclusion, Captain Phillips is filled with anxiety-overkill and its clearly a deterrent. Furthermore, the movie's third act rings all too familiar to last year's Best Picture Nominee, Zero Dark Thirty. Therefore, being so fresh in our minds and far superior to this rehashed effort, Captain Phillips becomes a poor man's version of Kathryn Bigelow's hit, but still worth the price of admission.

Tom Hanks has always been a magnificent performer, and his role in the action/drama Captain Phillips reiterates that notion. It doesn't matter if he's winning Golden Statues or not, Hanks is one of the greatest actors of all-time. And once again, you won't be disappointed with this one. If you can handle the anxiety and withstand the suspense, then you can't go wrong with Captain Phillips.