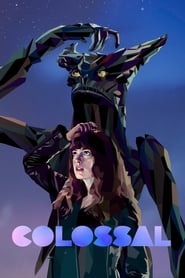 One of the strangest and most original stories out of this year's SXSW festival comes from none other than Nacho Vigalondo. And although his film has enjoyed a nice little run on the festival circuit, with a premiere in Toronto and an inclusion at Sundance, Colossal finally finds a limited theatrical release in select cities later this month. Vigalondo teams his unconventional comedy tale with the fully committed talents of Oscar-winner Anne Hathaway and Jason Sudeikis in this truly limitless story.

After losing her job and being kicked out of her boyfriend's apartment, Gloria (Hathaway) is forced to bite the bullet and move back to her hometown. Upon her return she runs into Oscar (Sudeikis), a former classmate and current bar owner who offers Gloria a job at his establishment to try and help her get back on her feet. But as her work life transitions into after-hours binge drinking, Gloria soon discovers an unexplained connection between her and a giant monster that's been terrorizing the citizens of South Korea.

If the premise of Colossal sounds absolutely absurd, it's because it undoubtedly is. However, the clever metaphor created by Nacho Vigalondo surrounding the monster we can become when we've had one too many to drink screams originality. However, Vigalondo's clear aptitude for conjuring up a new and fresh idea becomes soured by the film's tone-deaf delivery. Colossal cycles around moments of comedy, romance, action and drama with reckless abandon, unsure of what it wants to be and how it should get there. The effort works best as a comedy, but completely spins off the rails in a gritty third act that trades its laughs for a superhero-like finale that Hathaway against an unsuspecting foe. Colossal possesses so much promise from a creative standpoint, allowing me to believe that Nacho Vigalondo has plenty more left in the tank. Yet, despite immensely committed performances from Hathaway and Sudeikis, Colossal remains too scatter-brained and unfocused to delivery the knockout punch that Vigalondo is desperately going for.