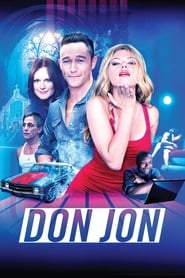 Joseph Gordon-Levitt is far from a new face in Hollywood. His time in the industry dates back to the early 1990s, most prominently with his first real breakthrough role in the family film Angels in the Outfield. Almost two decades later and the gifted actor has decided to expand his artistic ability. Gordon-Levitt tackles his first attempt behind the camera with his directorial debut, Don Jon.

Joseph Gordon-Levitt's Don Jon is a big-hearted comedy that ultimately falls victim to a cyclic and monotonous approach. Underneath all of the recurring trips to the gym, Sunday confessionals and family dinners, resides a deeply dramatic story that's worthy of acknowledgment. However, Gordon-Levitt bogs down the most notable aspect of his film with redundant scenes that we're forced to sit through over and over (and over ...) again. Throughout all of this repetition very little is actually gained or lost, making Don Jon's mere 90 minute running time feel more like an eternity. In fact, the feature's most interesting character, Esther (who is brilliantly portrayed by Julianne Moore), fails to play a significant role in the film until it's already too late. While Joseph Gordon-Levitt's directorial debut offers a meaningful story that culminates quite well, Don Jon gets lost in a tiresome cycle of ineffective moments.

Although the movie suffers from its shortcomings, there are plenty of hilarious scenes and a strong uplifting moral to the story. Don Jon's side characters develop a winning sense of charm and charisma. The star's onscreen friends are full of silly one-liners and outlandish behavior that help keep the jokes coming. They prove to be a breath of fresh air as you wade through the slower-paced moments of the film. But despite the fine work from Don Jon's entire supporting cast, an over-embellished vibe and an unchanging delivery are too much to overcome.

I've been a longtime fan of Joseph Gordon-Levitt for many years now. He can be found all over my home collection of DVDs. And although Don Jon is a missed attempt, there's still a commendable heart and soul to the feature that the budding filmmaker can clearly build on for the future. I wouldn't count him out just yet. But in the meantime, you won't miss much by avoiding the new comedy, Don Jon.