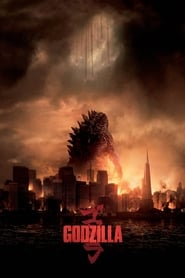 After 1998's laughable attempt at a reboot, expectations for Gareth Edwards' Godzillahave grown to monstrous sizes. Yet, this isn't the young director's first go-around with over-sized creatures. His directorial debut came in 2010 with the successful indie sci-fi drama, Monsters, which centered around enormous alien creatures inhabiting the earth. But now, in 2014, Edwards is heavily tasked with reviving the greatest monster franchise the world has ever known.

After a mysterious disaster at a Tokyo nuclear facility claims the life of his spouse 15 years earlier, scientist Joe Brody (Bryan Cranston) must convince his son, Ford (Aaron Taylor-Johnson), and other officials that the unexplained force which destroyed the city is about to return. And after discovering a secretive government conspiracy that spirals out of control, gigantic monsters are unleashed upon the world causing chaos and destruction. With no hope of resolution, the world must stand by and watch these mammoth creatures battle it out and let nature take its course.

The long-awaited and highly anticipated return of Godzilla carries a fair share of criticism and the occasional praise. For audiences craving action-packed sequences of rampage and demolition, Gareth Edwards gives you plenty to look forward to. However, with this reboot the dramatics are forced, the plot is flimsy and, to be perfectly honest, there just isn't enough of the title monster. Given that the blockbuster's running time is north of the two hour mark, I was excited to witness a Godzilla overload. Instead, Edwards pulls back on the reins time and time again throughout the film with hopes of building momentum for a massive finale. To the director's credit, the final 25 minutes deliver a huge punch of non-stop monster-fighting-mania which is almost worth the price of admission all on its own. But otherwise, a lackluster attempt at stirring up the drama and devoting too much attention to a sketchy storyline leaves plenty to be desired with Godzilla.

Another major flaw with Gareth Edwards' latest effort is the inefficiency of a typically talented cast. First, under-utilizing the film's most gifted performer, Breaking Bad's Bryan Cranston, is a huge disservice to the final product. Furthermore, as someone who has always admired the work of Kick-Ass star Aaron Taylor-Johnson (especially as a young John Lennon in 2010's Nowhere Boy), it was difficult to accept that this recent effort happens to be the most insignificant of his budding career. With Godzilla, not only is the long list of performances a letdown, but the elementary dialogue is stacked with cliches and thoughtless verbiage. From top to bottom, Gareth Edwards offers very little outside of a remarkably effective closing sequence.

I went into Godzilla with elevated expectations and walked out of the theatre slightly disappointed. As someone who enjoyed the well thought-out plotlines in Edwards' Monsters, I hoped for something more interesting than what was given. The first half of Godzilla begs to elicit the dramatics while the latter portion serves as a prototypical action movie. Yet, neither half is exceptional, and that means we'll just have to continue to wait for the next worthy installment of the Godzilla franchise.