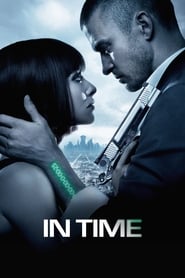 Justin Timberlake's transition from the music industry to the big screen has been as smooth as possible. He showed excellent ability in early work like Alpha Dog and Black Snake Moan, and then he was a big contributor in the awards season juggernaut The Social Network. Finally, he followed all of his previous supporting roles with a solid leading debut in the romantic comedy Friends with Benefits. There was nothing Timberlake couldn't do, that is, until now. With director Andrew Niccol and his latest science fiction action/thriller In Time, Timberlake shows us all that he is, in fact, human.

In Time is set in the distant future where time has become the new currency. No one ages past 25 years of age, and on your 25th birthday the clock on your arm begins to start counting. You have one year of time to live unless you earn more time (just like you would money). People are also forced to spend their accumulated time on everyday things like food and other types of bills. So in a world where the poor move quickly and the rich leisurely enjoy their everlasting time, Will Salas (played by Timberlake) is given a century of time by a wealthy man tired of living. While being investigated by law enforcement known as "timekeepers", Will kidnaps the wealthy Sylvia Weis (played by Seyfried) to escape incarceration. Together, Will and Sylvia embark on a quest to overthrow this corrupt division of social classes.

Director Andrew Niccol is by no means a newcomer to the science fiction genre. In his late 90's work Gattaca, Niccol brilliantly creates a futuristic world consumed by a desire for genetic perfection. Similar to Gattaca, In time focuses on a specific idea and elaborates on it for great lengths. Unlike Gattaca, Niccol's latest feature fails at successfully doing so. In Time feels forced and over exaggerated, so much so that the film loses its flare. The core ideas behind the picture are undeniably clever, yet the movie's execution falls well short of its potential. As a result, the blame lies solely on the shoulders of its director.

The film's inability to resonate with the audience is, in large part, due to its ineffective cast. Lead by Justin Timberlake and his forgettable co-star Amanda Seyfried, the movie's acting seems superficial and insincere. The star's performance is spotty and overly inconsistent. Despite a few scenes where you can recognize the actor's uncanny ability, Timberlake spends most of his screen time engaging in poor dialogue which only complements his shortcomings. In addition to Justin Timberlake's lackluster delivery, his co-stars Amanda Seyfriend and Cillian Murphy manage to set the bar even lower. Filled with poor acting and a pedestrian script, In Time is far from the creative sci-fi thriller it should be.

To the film's advantage, however, In Time does flow naturally and entertain the audience to some degree. As a viewer you'll never get bored, instead you will feel unconvinced and unimpressed. It happens in Hollywood all of the time, great ideas fall flat of their potential over and over again. In Time is just another example of this unfortunate reality.