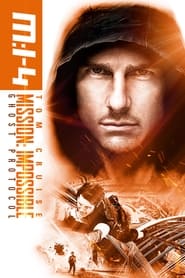 Tom Cruise is one of my favorite actors of all time. He peaked during my adolescence in the 90's and I've been hooked ever since. Therefore, it kills me to say that Cruise's career has been on a steady decline since the turn of the millennium. It was 2010 when Cruise finally hit rock bottom with the Action-Romance picture Knight and Day, where the one time Academy Award Nominee teamed up with Cameron Diaz (enough said). But as a fan of the third Mission: Impossible installment, I became eager for the newest addition after its overwhelming reception by critics. I thought maybe this could be the film that finally catapults Cruise's career back to the forefront of Hollywood. Since I couldn't wait any longer, I headed to a local theatre and buckled up for the ride.

Ghost Protocol begins in Budapest, where the IMF has a team in place to break Ethan Hunt (played by Cruise) out of a foreign prison. Once Hunt is back in IMF hands they present him with a new objective. Ethan Hunt's mission, if he chooses to accept it, is to break into a heavily guarded Russian building and retrieve vital information needed to stop Kurt Hendricks from launching Russia's nuclear weapons. When the mission is botched and the IMF is framed by Hendricks, the United States detaches itself and places the program under ghost protocol. No longer having government approval, Hunt and his team of agents decide to take matters into their own hands in order to stop Hendricks from causing a nuclear holocaust

With a strong premise and enough action to satisfy any junkie, Mission: Impossible - Ghost Protocol serves its purpose as a thrilling film. However, the movie's uncharacteristic director, Brad Bird, manages to offer very little more than an action packed experience. Bird, who is best known for directing family films like Ratatouille and The Incredibles, proves he can deliver on thrills and nothing more. MI: 4 attempts to bob and weave through the obvious but the twists and turns never feel genuine. The Swiss cheese plot is easy to follow, but flawed beyond repair. Also, there's no shortage of cliches and abysmal dialogue, thus, illustrating that Bird and company are slightly out of their element.

Despite MI: 4's lack of originality and cohesive cleverness, the film does manage to offer a new sense of style. With the welcome addition of Simon Pegg and Jeremy Renner (whose character feels way too forced into the script), the movie has an authentic comedic undertone. The film's subtle humor helps sidestep the audience around its blatant problems. Pegg and Renner are solid newcomers to the franchise and will hopefully stick around for an almost assured 5th installment. Furthermore, Cruise is serviceable in his leading role but nothing above and beyond the call of duty. On the contrary, Paula Patton is obviously the weakest link of the group and borderline intolerable as the female member of the team. Patton was excellent in her role in the Oscar nominated film Precious, however, she takes a step backwards with her performance here. But minus Patton, who they could do without, the acting in MI: 4 is adequate enough to carry the film along unscathed.

With this fourth addition of the franchise, there are an abundant amount of pros and cons alike. MI:4 lands face first in the realm of mediocrity. There's plenty of solid action in the film, but beyond that the script and dialogue are very flat. Ghost Protocol isn't quite worthy of the outpouring of love it's received from the critics.