Review | Now You See Me
Search 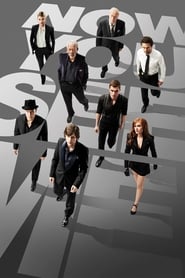 Despite being in the full swing of the summer blockbuster season, one less-than-typical big budget film to hit theatres this month is Louis Leterrier's Now You See Me. Leterrier, who's best known for his direction of Clash of the Titans and Transporter 1 & 2, gives a high octane dose of magic. This mystery-thriller surprisingly delivers enough action and energy to help warrant its "blockbuster" classification. Therefore, when you head to the theatre this summer seeking out the gaudiest box-office hits possible, writing off Now You See Me as a minuscule magic-centered movie simply means, the joke's on you.

A quartet of extremely talented street-performing illusionists and mentalists (played by Jesse Eisenberg, Woody Harrelson, Isla Fisher and Dave Franco) are summoned together to accomplish some of the grandest feats in history. But after robbing millions of dollars from a Parisian bank as their Las Vegas stage finale (without ever leaving the room), the FBI must unravel how and why these magicians are up to no good. Yet, the closer agent Dylan Hobbs (Mark Ruffalo) and famed magic-debunker Thaddeus Bradley (Morgan Freeman) get to figuring it all out, the less they actually know.

Now You See Me is an above average thrill ride possessing a completely star-studded cast and a unique story. First and foremost, Jesse Eisenberg and Mark Ruffalo lead a superb collection of new and old Hollywood greats. Legends such as Morgan Freeman, Michael Caine and the always amazing Woody Harrelson cross talents with a newer generation of stars. The result is a set of wonderfully branded characters that undoubtedly raise Now You See Me to the next level. While Eisenberg and Ruffalo lead the way, Harrelson offers his usual scene-stealing supporting efforts that never leave a dull moment for the audience. In fact, Eisenberg admittedly stated that once Harrelson was on board, the script was slightly reworked to better fit his comedic talents. And believe me, the results show. Another significant glowing aspect to the film is its carefully crafted story. Thanks to a commendable amount of originality to the script, Now You See Me constantly feels fresh and new. With all of the remakes, sequels and rehashed ideas floating around the industry, it's refreshing to find an energetic and singular story.

Although Louis Leterrier's Now You See Me successfully grabs the audience, the feature still manages to illustrate some significant flaws. For starters, as a film about illusionists and magicians, there was an immense focus on delivering an abundance of stunning visuals. While I can understand their desire to do so, I found some of the effects to be completely unnecessary and distracting to the movie's finer elements. Furthermore, Now You See Me caters to a summertime audience by doing all of the work for you. As an active-viewer who enjoys thinking for himself (to a reasonably attainable and not overly-ambiguous degree), the film refuses to allow the moviegoer to dissect the mystery on their own. Containing an almost insurmountable amount of unrealistic sequences followed by an undetectable conclusion, Now You See Me requires that the audience simply watch and be entertained. At least the thrills and uniqueness make the ride enjoyable.

There will be plenty of hits and even more misses during this summer's blockbuster season. Now You See Me is one of those films that lands somewhere in between. For sheer entertainment value, it's well worth the price of admission. The jokes are a nice little touch, the action is beyond what you'd expect and the story isn't very robust, but compelling nonetheless. While I wouldn't recommend flocking to theatres to catch Now You See Me (a DVD rental will do just fine), you won't be disappointed if you do.