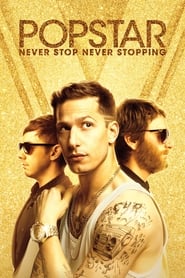 While Saturday Night Live Alumnus, Andy Samberg, has enjoyed an overwhelming amount of success with his hit television sitcom, Brooklyn Nine-Nine, he returns to the big screen with the new mockumentary comedy, Popstar: Never Stop Never Stopping. With recent behind-the-scene movies capturing the lives of musical celebrities such as Katy Perry, Justin Bieber and the group One Direction, Samberg decides to flip the growing genre on its side with a largely comedic twist. Yet, the final result is a middling endeavor that can only muster up the occasional laugh.

Years ago, three childhood best friends form the dynamic music group known as The Style Boyz. Their hip hop influence helps paves the way for a generation of musical talents until their frontman, Conner4Real (Samberg), branches off to pursue a solo career. But once Conner's second solo album struggles to generate sales and empty seats overtake his live performances, Conner must cycle back to his roots in order to recapture his groove.

Popstar unravels as a clever idea that's never utilized to the best of its ability. The film's entertaining theatrical trailer stirred the occasional chuckle, therefore it was disappointing to discover I had already witnessed Popstar's funniest moments. Thankfully, the film's less than 90 minute running time keeps the story moving and provides a decent level of pacing, or else things could have been disastrous. Furthermore, I've vocalized my distaste for using male genitals as a punchline. The trend is simply outdated, unoriginal and, most importantly, completely unnecessary. Popstar succumbs to the temptation and, as you would expect from an overblown mockumentary, takes the penis-showing joke to a whole new level with so much screen time I could probably pick it out of a lineup. However, to the film's benefit, I will admit that the context of the joke at least offered a sense of originality and thoughtfulness that I can appreciate to some degree. But all in all, Popstar isn't nearly as hilarious as it needs to be and Samberg's latest effort culminates as nothing more than a mediocre attempt at something new.