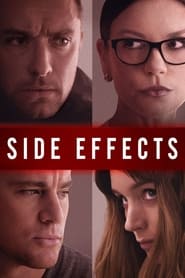 Director Steven Soderbergh has been quite the busy man of late. Over the past two calendar years, Soderbergh has somehow found the time to release four major motion pictures. The first one being the director's critically acclaimed outbreak film Contagion. He followed that release with the female-leading action film Haywire. Next up, Soderbergh tackled the widely loved male stripper feature Magic Mike. Now, the director gives us his most recent work to date with the mind-bending pharmaceutical thriller Side Effects. As the old saying goes, it just so happens that Soderbergh "saves the best for last".

Emily and Martin Taylor (played by Rooney Mara and Channing Tatum) have a far from typical marriage. Shortly after tying the knot, Martin was incarcerated for insider trading. Emily patiently stood by her husband and frequently visited him during the lengthy four year sentence. Upon his release, Martin vows to return things to the way they were. However, Emily's history of depression surfaces once again, ultimately landing her in the care of psychiatrist Dr. Jonathan Banks (played by Jude Law). After trying a series of medications that don't quite do the job, Emily begins taking a new pill called "Ablixa". Yet, the side effects unexpectedly lead to deadly consequences.

Steven Soderbergh's latest directorial effort, Side Effects, is a provocative and evolving thrill ride. Although the film's sequence of events unfold in an abnormal fashion, Soderbergh offers a unique and non-traditional perspective to this blend of drama and suspense. The ever-changing plot leads to plenty of twists and surprises that help keep the feature feeling fresh and new throughout its entire duration. And not only does Side Effects win over audiences with its sexy and captivating story, Soderbergh's entire cast adds an enormous amount to the whole experience. Backed by a pair of Oscar Nominees in Rooney Mara and Jude Law, perhaps Side Effects benefits most from strong supporting turns by Catherine Zeta-Jones, Channing Tatum and Ann Dowd. As someone who admittedly speaks out against a much of Soderbergh and Tatum's other work, both deliver some of the finest efforts of their careers and deserve serious praise for doing so. Through unconventional, yet profound, direction and a stellar storyline, Side Effects culminates as a welcome addition to an otherwise weak showing of early year releases.

For as strong of a film as Soderbergh's Side Effects is, there are a few detracting areas to the movie. First, a major eye-opening turn of events occurs directly in the middle of the feature. Therefore, it leads to a long and overdrawn resolution to the film that, in a perfect world, would have been cleaned up better. The picture's second half never quite equals up to its tension-filled opening portion. However, by dissecting this interesting story in a distinct way, Soderbergh creates an original modern brand that he can stamp as his own. Furthermore, for as clever as this wild cat & mouse game plays out, Soderbergh turns Side Effects into a somewhat pretentious and overblown psychological thriller. Instead of delivering a suspenseful second half of the film, Side Effects instead takes unexpected turn after unexpected turn feeling almost too smart for its own good. Flawed yet appealing, Soderbergh's recent work stands out as one of the director's finest releases to date.

Artistic styles of classic directors such as De Palma and Hitchcock resurface in Steven Soderbergh's contemporary thriller Side Effects. While the final product is far from the cinematic masterpieces offered by the previously mentioned directors, Side Effects is a welcome return to a forgotten style of filmmaking. Tense, suspenseful and thrilling, Soderbergh has found his niche. Hopefully he follows up Side Effects with many more films of this flavor. Although the picture is far from perfect, Side Effects is still worth seeing as it's clearly one of the finest early-year releases in 2013.