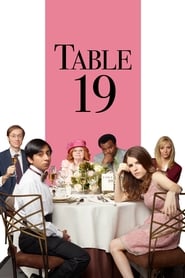 Mark Duplass and Jay Duplass have made a successful career out of crafting personal stories filmed on minimalist budgets. The sibling writing duo hand over another hilarious, albeit flawed, script to Spellbound director Jeffrey Blitz. And with leading lady, Anna Kendrick, in tow, Table 19 satisfies all your comedy cravings while whiffing badly on its hard-pressed dramatics.

Eloise (Kendrick) is set to be the made-of-honor at her oldest friend's upcoming wedding. But days before the ceremony, she's dumped via text by the bride-to-be's brother, Teddy (Wyatt Russell). Consequently, Eloise is removed from her made-of-honor duties and relegated to table 19 with all of the other "random guests", after she surprisingly decides to attend the wedding anyway.

The latest indie dramedy from the minds of the Duplass brothers leaves such a bittersweet aftertaste. From a comedic standpoint, it may be their funniest screenplay yet. Filled with outrageously quirky characters and cleverly developed humor, Table 19 offers no shortage of laughs. In fact, former Hello Ladies star, Stephen Merchant, steals the show with an oddly over-the-top role that fits his goofy persona so well. However, the film falls apart quickly once Jeffrey Blitz and company force-feed an unforgivably bad attempt at a dramatic centerpiece. Table 19 struggles to find its proper tone and relies heavily on unrealistic character epiphanies to progress the plot. With a screenplay that's suffocated by miscues and a fruitless sentimental core, there's little else to support the film's sporadic moments of hilarity.