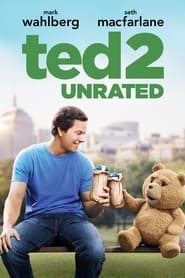 Animation guru, Seth MacFarlane, proved once and for all with his 2012 comedy hit, Ted, that he was capable of transitioning to a big screen director. And while his sophomore effort, A Million Ways to Die in the West, was an absolute disappointment, MacFarland attempts to get back to his comfort zone with the highly anticipated sequel, Ted 2. Regrettably, though, MacFarlane will have to continue trying to top his original work.

A few years have passed and John (Mark Wahlberg) has divorced while Ted's ties the knot with his grocery store check-out co-worker, Tami-Lynn (Jessica Barth). With a shaky marriage brewing between the Teddy bear and his foul-mouthed wife, they decide that having a child is the only way to reconcile. However, in order to adopt a child (due to Tami-Lynn's drug-destroyed ovaries), Ted must prove that he's a person in a court of law. So they enlist the help of a novice trial lawyer named Samantha Jackson (Amanda Seyfried) and take on the almighty powers that be.

Ted 2's brightest moments occur when Seth MacFarlane sticks to his mantra of one-liners and merciless zingers regarding pop culture icons. The writer-director is massively effective when it comes to constructing these kinds of jokes. However, MacFarlane struggles to develop a cohesive and sensible story to help put his comedic prowess on display. He completely misses by continuing his blind loyalty to actor Giovanni Ribisi. After Ribisi's character nearly spoiled the franchise's first installment, there is absolutely no need to revive "Donny" in this sequel. While the blame deserves to land solely on MacFarlane's shoulders, as Ribisi has proven that he's a capable actor, Ted 2 suffers from an unforgivable second act that's plagued by unnecessary subplots and an over-extended script that pushes the comedy far past its desirable limits.

The third feature from Seth MacFarlane isn't all doom and gloom. Just like the original, Mark Wahlberg gives a fully committed performance once again and demonstrates his natural ability for eliciting laughs. Yet, despite Wahlberg's fine work in the film, trading Mila Kunis for Amanda Seyfriend is ultimately a bit of a loss. While Seyfriend is merely serviceable, Ted 2 uses a long list of cameos from Liam Neeson, Jay Leno and Tom Brady to keep the jokes fresh. But in the end, all of these shining bright spots become inevitably overshadowed by a flimsy story that provides a brittle foundation for the comedy.

Of course Ted 2 will make you laugh, much like anything MacFarlane has his hand in. Nevertheless, you're honestly better off revisiting the first film or soaking in some classic Family Guy episodes. This latest effort from Seth MacFarlane is by no means a complete bombshell, but it's definitely a long-winded affair that offers very little more than a solid barrage of first-half laughs and a steady stream of second-half yawns.