Review | The End of the Tour
Search 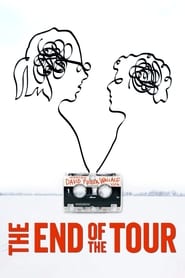 The End of the Tour
Movie Critic Dave's Ratings
Stars

I've never been an avid reader, so it's safe to assume that I haven't wrapped my brain around David Foster Wallace's groundbreaking 1,079 page 1996 novel, Infinite Jest. Having very little prior knowledge of this unusual author who's known for always wearing his trademark bandanna, even though the idea of this personal choice representing some preconceived "fashion statement" would have ran maddening circles around his mind until it nearly exploded, I was intrigued to learn more about Wallace through a very impressive team of collaborators. Filmmaker James Ponsoldt's early work is impressive all on its own, but he emerged onto the scene in a big way with his most recent success, The Spectacular Now. And once you add two narrow, yet immense, acting talents like Jesse Eisenberg and Jason Segel into the mix, The End of the Tour becomes an indie drama I wouldn't think to miss.

Upon hearing news of David Foster Wallace's (Segel) tragic suicide in 2008, David Lipsky (Eisenberg) fishes through his closet and listens to some old cassette tapes. These conversations transport Lipsky back to 1996 where the one time Rolling Stonereporter embarked on a five-day journey with the lonely, albeit it brilliant, critically acclaimed author. As these two free-thinkers travel around the final dates of Wallace's book tour together, their interactions break down barriers and evolve into philosophical discussions surrounding society, fame and addiction. Conversations that Lipsky and the rest of the world will cherish long after the sad loss of this progressive writer.

James Ponsoldt's The End of the Tour is a captivating and highly personal examination of the human psyche. Brought to life through the transcending performances of its two leading stars, the film's rich dialogue is both existential and enthralling. Jason Segel is an absolute revelation who embraces his portrayal of David Foster Wallace with an obvious sense of passion and respect. To experience The End of the Tour is to discover avenues of life and existence that often go ignored and become lost in the mundane patterns of every day behaviors. The film delivers an exuberance and awareness to one's cognitive being that's utterly refreshing. Ponsoldt places his audience into the unique perspective of Wallace's forward-thinking mind and shows how terrifying and lonely it can be to find enlightenment.

For all of the movie's remarkable dialogue-heavy interactions and sharp mental expansion, The End of the Tour is an extremely unconventional piece of work. The film circumvents any real story or plot.. Instead, it serves an homage of sorts to David Foster Wallace and the artistic genius we lost far too young. And despite an occasional sluggish pace, The End of the Tour presses on with its convictions and shapes a delicate piece of liberating art. One that leaves a rare imprint and will stick with me forever.

Some films tell magnificent and grand stories that dazzle and excite. Others search for something deeper and more profound. It's safe to say that The End of the Tour is the latter. David Foster Wallace believed that all different forms of entertainment can become mind-numbing and hypnotic to the point where people fail to exercise life's greatest gift, the ability to think for yourself. That's a valuable lesson and one that everyone deserves to hear. Thank you to James Ponsoldt, Jesse Eisenberg and Jason Segel for sharing it with me.