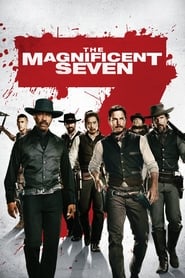 Denzel Washington and director Antoine Fuqua go together like peanut butter and jelly. The collaborative duo have a history dating back 15 years to the filmmaker's undeniable finest work, Training Day. It also happened to be the same film that handed Denzel Washington his second Academy Award. And although I wasn't too impressed by their 2014 joint effort, The Equalizer, the pair's latest endeavor and Western reboot, The Magnificent Seven, proves to be a solid entry.

Industrialist Bartholomew Bogue (Peter Sarsgaard) will do whatever's necessary to overtake the small town of Rose Creek for his financial gain. And after a strong-willed widow (Haley Bennett) loses her husband to Bogue's violent actions, she and the rest of the town's inhabitants offer everything they have in exchange for protection via a bounty hunter named Chisolm (Denzel Washington). The bounty hunter accepts their offer and summons a ragtag group of gunslingers to help fight alongside the townsfolk against Bogue's army of combatants.

I've always gravitated towards the Western genre. And while The Magnificent Seven is far from an exceptional film, it provides adequate entertainment and checks off many boxes from the genre's list. It's the little things like an excellent score from James Horner and Simon Franglen and solid direction that help combat a few writing and acting deficiencies evident throughout the film. Chris Pratt is a bona fide Hollywood star, yet his performance feels wildly out of place. Furthermore, the script fails to sufficiently develop quite a few key characters. However, despite these structural shortcomings, Antoine Fuqua still manages to produce a fun and enjoyable western reboot that's definitely beyond much of his recent work.