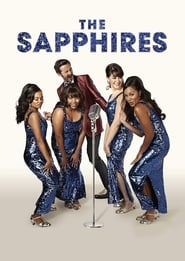 Back in October, I managed to view over 20 films during the Philadelphia Film Festival. But despite seeing many big-named releases such as Silver Linings Playbook, Flightand Cloud Atlas, I kept hearing rumblings about an Australian independent film called The Sapphires. Scheduling conflicts forced me to miss the movie, however, The Sapphires still managed to boast a pair of impressive sellout shows. Therefore, when the indie film made another trip back to Philadelphia last night, I refused to miss out on the experience.

The Sapphires tells the true story of four female Australian aboriginal singers who join forces with an outgoing talent scout (played by Chris O'Dowd) and journey to Vietnam to entertain U.S. troops in 1968. Throughout the danger-filled tour all over hostile parts of Vietnam, the girls and their manager must carefully learn how to balance ambition, love and deep-rooted family issues all while increasing morale for the American troops that they're entertaining.

Filled with a fantastic soundtrack, talented acting and a genuine story, The Sapphires serves as a rich and delightful piece of family entertainment. The Australian indie film made its world premier at the Cannes Festival in May, 2012. The credits rolled to a monstrous standing ovation and, at that exact moment, The Sapphires became much larger than anyone could have ever imagined. What mainly sets the movie apart is its semi-animated characters that the cast and script so brilliantly elaborate. The unbreakable bond formed between the audience and the story is slowly built on the shoulders of the film's leading star, Chris O'Dowd. Many will recognize O'Dowd as the lovable police officer who wins the heart of Kristen Wiig in the comedy hit Bridesmaids. However, the long time actor's career has finally begun to blossom and The Sapphires reminds us all that his talents are awfully impressive. This may be O'Dowd's finest work yet, as his on-screen romance with co-star Deborah Mailman becomes the make-or-break cornerstone of the feature. In addition to the fine performances from O'Dowd, Mailman and the rest of the cast, The Sapphires also incorporates stellar cinematography and outstanding direction from the man behind the curtain, Wayne Blair. Their economical approach and stunning perspective bring life to the film and help elevate The Sapphires to stardom.

Although the film is clearly a success, The Sapphires is far from perfection. The movie begins in a patchy and brow-raising manner in which many of the stories are pieced together ineffectively. The first act suffers from a messy concoction of back-story overload and meandering ideas. But thanks in large part to Chris O'Dowd's character, The Sapphires manages to correct its course by delivering a toe-tapping and rhythmic flow that sway-fully carries the audience all the way through the film's emotionally charged mid-section and conclusion. By surviving a sputtering beginning, Blair and company's remarkable true story comes to life in an unforgettable fashion.

The Sapphires is an entertaining blend of comedy and drama. Its light-hearted moments are complemented by intense war scenes and dramatic flair, perfectly illustrating the well-rounded nature of the film. If you can find enjoyment in a quasi-musical (there are numerous singing sequences throughout), then there's plenty to love about Wayne Blair's The Sapphires. Due out in limited release on March 22nd, The Sapphires is a worthy watch.