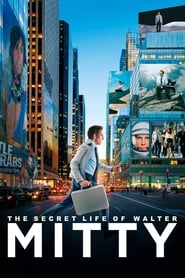 It's easy to label Ben Stiller as a typecast actor who's perfect in any awkward and nerdy shy-guy role. But truth be told, that's simply a cop out. Stiller has played a major part in the writing, directing and acting prevalent in well-regarded films such as Reality Bites, Zoolander and Tropic Thunder. And when The Secret Life of Walter Mitty finally reaches theatres this Christmas Day, we'll get to add his finest work to the top of that last.

Walter Mitty (Stiller) is a boring and unsociable day-dreamer who constantly uses his imagination to escape reality. Throughout all of these fantasies, Walter partakes in unfathomable acts of heroism in order to win the affection of his co-worker Cheryl (Kristen Wiig). But when reality sets in at the office and he can't find the vital print of Life magazine's final cover, Walter must live his ultimate fantasy in order recover the image and impress the woman he desires.

The Secret Life of Walter Mitty is one of those movies that you can't help but enjoy. With reserved expectations, Ben Stiller's latest project is a surprisingly strong effort. The film blends together beautiful cinematography with a well-acted and meaningful story. Stiller deserves all the credit as both the leading actor and the visionary director behind this whimsical adventure. He creates an affable character that commands the audience's adoration. Walter becomes someone worth rooting for, and that makes all the difference in the success of the feature. As a result, his journey ends up more marvelous and salient than you ever dreamed possible.

Despite its greatest of intentions, The Secret Life of Walter Mitty is occasionally off-the-mark. Stiller's hard-headed desire to create such a perfect and delightful little story leads to a weak conclusion, one that panders to the unnecessary fairy-tale ending that feels oddly misplaced. Walter's expedition and transformation are purposeful enough, the rest is just fluff and overkill. Give me a pair of scissors and five minutes in the editing room, and I'd take about 10 minutes or so right off the end. However, Stiller has the final say and he misses badly by tying a pretty bow on everything.

Although it has its flaws, The Secret Life of Walter Mitty is completely entertaining and definitely worth a watch. The imagery is phenomenal and the soundtrack is definitely on point. You'll be swept away by its characters and there are plenty of elements to enjoy with Ben Stiller's most recent addition.