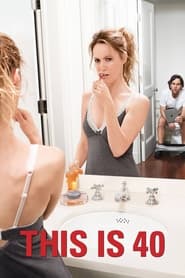 When it comes to director Judd Apatow's work, he has an interesting and particular vision. His irregular, yet carefully honed, style is both peculiar and fascinating all at the same time. He's a living conundrum. His major motion picture debut came in the form of the raunchy tale The 40 Year Old Virgin, which is admittedly one of my favorite comedies of the 2000s. He then followed up with the $200 million comedy Knocked Up, an occasionally vulgar but far more sensitive brand of humor. However, it was Apatow's third feature that got everyone caught in a tailspin. 2009's deceptively titled Funny People yielded less laughs and alienated moviegoers by running nearly two and a half hours long and addressing such weighty topics like death and cancer. Living with a dark cloud over his head ever since, audiences want to know if Apatow's newest spin-off film, This is 40, is more like its originator Knocked Up, or its predecessor Funny People. Truth be told, it's somewhere in between.

This is 40 revisits the erratic and dysfunctional married lives of Pete (played by Paul Rudd) and Debbie (played by Apatow's wife, Leslie Mann). As they both reach the pivotal age of 40, the couple agrees to take a happier and stress-free approach through the next phase of life. But when news of Pete's failing record label leads to financial instability for their family, lies begin to accumulate and the couple quickly learns that there's no escaping the hardships of life and marriage.

Judd Apatow's upcoming release, This is 40, proves to be a successful turn and step forward on his path back to previously reached heights. Illustrating a fearless disregard for the two-hour threshold, the director once again attempts to bridge the divide between comedy and drama. But make no mistake about, This is 40 is clearly a comedy first. At its brittle heart and center are leading stars Leslie Mann and Paul Rudd who prove to be adequate but imperfect. In fact, This is 40 looks past its main couple and succeeds on behalf of its strong collection of eclectic supporting characters. Excellent performances from the likes of Albert Brooks, Jason Segel, Megan Fox and Chris O'Dowd help the audience to ease their way through a sometimes bumpy ride. Brooks shines brighter than the rest and delivers a large portion of the film's most memorable moments. The jokes are fresh and consistent and you can rest assured that there's no shortage of laughs here. And while This is 40 doesn't quite measure up to the glaring success of past works such as The 40 Year Old Virgin and Knocked Up, the film in a refreshing return to a comedy-first outlook that's made Apatow a household name.

Although This is 40 is definitely a step in the right direction, the feature has many distinct faults. For starters, it becomes quite irksome to spend two hours and fifteen minutes watching a couple complain about money issues while they drive around in BMWs and throw extravagantly catered parties. The whole first-world "woe is me" routine ultimately makes it difficult to sympathize with Pete and Debbie's onscreen dilemmas. Furthermore, Apatow's undulating script makes for a roller-coaster ride of up and down moments between the leading couple. This is 40 becomes a repetitive sequence of problem/solution ... problem/solution ... problem/solution ... almost to the point of ad nauseam. Still, despite all of its visible flaws, This is 40 contains the appropriate amount of laughs and strong cameo's (a job well done to Philadelphia Flyers Scott Hartnell and Ian LaPerriere - see below) to keep you engaged from start to finish.

This Christmas writer and director Judd Apatow brings us, This is 40, a hysterical comedy that translates well to the big screen. As imperfect as it is, the film marks a solid return for Apatow who really soured a large portion of audiences with his 2009 overly-dramatic dud Funny People. Still young and energetic, Apatow expects a long and prosperous career in the business. While he demonstrates a unique ability to generate a heartfelt comedy, Apatow's future success hinges on the type of stories he decides to tell. Sticking to a humor-first approach has benefited him in the past and benefits him now with This is 40. But despite its likability, there's no reason to rush to theatres to see this overly-long laugh fest. While This is 40 is a slightly above average movie experience, perhaps it's best suited for a Friday night movie rental.