Review | This Is Where I Leave You
Search 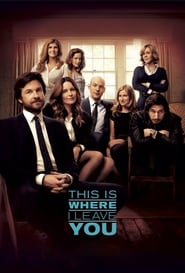 This Is Where I Leave You
Movie Critic Dave's Ratings
Stars

Another film currently out in theatres is the Tina Fey and Jason Bateman dramedy, This Is Where I Leave You. The film proves to be a letdown on multiple levels. It struggles to scrape by on the shoulders of its comedic foundation, solely because the quality jokes are too few and far between. And even when the movie swindles a laugh out of you, the humor never very sustains itself

This Is Where I Leave You follows a dysfunctional family that reunites to bury their patriarch. Each crazed family member bringing their own set of baggage, can they overcome their issues and unite as one? Or will they crumble under the consistent pressures that have plagued them their whole lives?

Rather than deliver a high volume of comedy, screenwriter and author Jonathan Trooper also attempts to lure the audience through multiple dramatic angles. Unlike some other recent Saturday Night Live alumni who have tackled serious acting with natural ease (i.e. Kristin Wiig and Bill Hader in The Skeleton Twins), Tina Fey appears to be a bit out of her league, delivering a mediocre performance in an empty role. Her character's story feels wildly misplaced, which complicates her ability to craft a convincing character, but she saves face by resorting to her knack for perfectly-timed humor. Then there's Jason Bateman. Admittedly, I've been a harsh critic of his in the past. However, I found a reasonable amount of enjoyment in this latest turn. But despite my affinity for Bateman's stellar performance, a prolonged ending and vast over-dramatization prove to be the fatal blows.