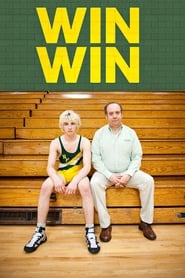 While growing up a high school wrestler in Pennsylvania, there were very few iconic films pertaining to my main sport. The most notable, thanks to a cameo by a very young pop star on the rise named Madonna, was the cult classic Vision Quest. Despite the nostalgic connection I have with the film, it's inevitable that the 80s movie fails to resonate with today's generation. In comes director Thomas McCarthy's latest release, Win Win. To be fair to the writer/director, Win Win is NOT a movie about wrestling. In fact, at a brief Q & A with McCarthy, he emphatically protested that Win Win is a movie about family. Although the film's back story focuses heavily on the sport, there's something far more real and authentic behind the feature.

Win Win follows Mike (played by Giamatti) and Jackie (played by Ryan) Flaherty, a suburban couple living in northern New Jersey. Mike is a lawyer with his own practice, yet it's on the decline. When a client of his, Leo Poplar (played by Burt Young), is ruled incapacitated by a judge, Mike takes on the responsibility of being his legal guardian. Along with the title, Mike gets a monthly $1,500 check to help keep his family afloat. While taking care of business at Mr. Poplar's house, Mike runs in to Kyle Timmons, a young boy who claims to be Leo's grandson. Ultimately, Mike welcomes the troubled teen into his home and discovers they can both learn a great deal from each other.

After seeing the trailer for Win Win during it's Sundance premier and reading glaring review after glaring review, I was more than eager to see the film. In fact, my anticipation was so high for Win Win, that it inevitably failed to reach my expectations. That being said, it's still a very good movie that deserves quite some recognition. Win Win is a charming script filled with as much comedy as there is drama. McCarthy always manages to creatively develop his characters through a strong set of dialogue. Unlike many bland films of late, the writer/director also realistically portrays a suburban atmosphere.

Not only did McCarthy do a standout job, but the entire cast was chosen perfectly. Everyone from Golden Globe winner Paul Giamatti down to first time actor Alex Shaffer (who played Kyle Timmons). Each character, no matter how big or small of a role, delivered brilliantly. Bobby Cannavale was especially excellent. As a best friend and assistant coach to Mike Flaherty (Giamatti), Cannavale's superb comedic delivery kept the mood of the film just right.

Despite all of the wonderful aspects of Win Win, the movie does contain a slight drag. But all in all there wasn't much to criticize with the film. It never tried too hard to be something special. The true beauty of the movie lies in its genuine tone. Think The Blind Side without overly animated characters. There's plenty to appreciate here, and I definitely recommend checking out Win Win.