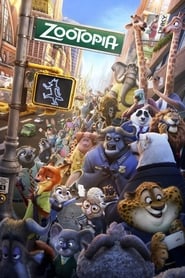 I've never been an animated film enthusiast, but every now and again you come across an absolute gem such as Toy Story, Finding Nemo and Shrek. Problem being, though, critics generally seem to adore an overabundance of family films, which forces me to sit through many mediocre efforts while I search for the greats. The latest raved about children's film, Zootopia, represents a prime example of the middling films over-hyped by critical acclaim.

In a developed animal world where predators and prey live in harmony, Zootopia is a lavish city where any mammal can grow up to be what it wants. Yet, while most animals settle for their natural life-callings, rabbit Judy Hopps (voice of Ginnifer Goodwin) possesses grand visions of being the first prey animal to become a police officer in Zootopia. Pushed to the side and ignored by her fellow law enforcement, she must team up with a sly and cunning fox (Jason Bateman) to solve the city's most notorious case.

One compliment that must be given to Zootopia is the valuable message at the film's core. A story centered on open-mindedness and equality for all, there is a bit of charm in the movie's main characters. However, sluggish pacing proves to be punishing as even I witnessed a mother and child leaving the theater long before the closing credits. And as a result, Zootopia feels more like a chore than a valuable movie experience.