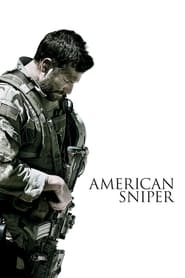 Every year a few prestigious titles hold off their general release until the last possible moment. Although most viewers won't be seeing Clint Eastwood's American Sniper until 2015 (me included), a late-December limited release in the Los Angeles and New York City markets only qualified the film for the upcoming Academy Awards in February. The reason for this is simple, many people believe there's a strategic advantage to being the freshest movie in a voting member's mind. And while no one will really know the impact until Oscar Nominations are handed out on Thursday, January 15th, the fact remains that American Sniper is a well-earned return to form for Eastwood.

Bradley Cooper stars as the war hero and patriot, Chris Kyle. After a stagnant life in the Texas rodeo prompted the 30 year old to join the Navy Seals and defend his country, Chris Kyle was deployed to Iraq where he collected more than 150 recorded sniper kills. But rather than the enormous number of Iraqi insurgents he murdered with pinpoint accuracy in order to protect his fellow officers, Chris was most haunted by all the American casualties he failed to save.

It's an undeniable truth, war desensitizes you. But what can prepare someone for pinning the Navy Seal emblem on their chest and becoming a trained assassin in an endless war? Bradley Cooper gives his most valiant attempt at understanding such a person as he lives, breathes and transforms himself into Chris Kyle, the deadliest sniper in American history. Cooper's immensely dedicated performance is both cold and selfless all at the same time. I watched an interesting interview where Chris Kyle described the barrier between the typical American lifestyle and the battlefield. Much like Jack Nicholson in A Few Good Men, Chris spoke about the every-day civilian's inability to process what goes on in a war zone. We could never really understand unless we experienced it, and perhaps that's what makes Cooper's performance so golden. He peels the layers of a character devoted to his country and guilt ridden while state-side in between tours, but aware of the war's crippling impact on his family life. This multi-dimensional story is brilliantly captured by Clint Eastwood, a director I've openly criticized after a lengthy decline in his quality of work. But much like a tough-love superior officer, I only offered my negative remarks towards Eastwood because of his illustrious history as a filmmaker. After the disappointing adapted musical, Jersey Boys, it was fair to say that Eastwood was capable of better. And with the upcoming general release of American Sniper, we're given a refreshing taste of his prior greatness.

Although American Sniper is a successful and tense action-drama, the feature suffers from a few detractors. Like many other recently adapted films, the source material is so expansive that it becomes impossible to transfer every aspect of the book to the big screen. Eastwood places the main focus on Chris Kyle's time in Iraq and, as a result, cuts a great deal of the Navy Seal's home life out of the script. Personally, I'm a fan of substance and story, so I would have gladly traded a majority of the constant gun fire and battlefield footage for a deeper insight into his personal life. Furthermore, some of the war-time scenes feel slightly unrealistic. Although a service member friend of mine assured me of more accuracy than I'd expect, witnessing Chris Kyle's personal phone calls to home while out on important assignments seemed both irresponsible and highly fabricated. However, an Oscar-worthy performance from Bradley Cooper and detailed direction from Clint Eastwood clearly overshadow the film's weaknesses.

With American Sniper you should expect a long-winded and slow-burning affair, regular staples in any Eastwood film. The repetitious cat-and-mouse struggle between Chris Kyle and a lethal Syrian sniper definitely over-extends itself as well. Yet, long after the credits roll,  Bradley Cooper's towering portrayal of a complex national hero will not be forgotten. The same goes for Chris Kyle's unselfish service to our country.