Review | A Million Ways to Die in the West
Search 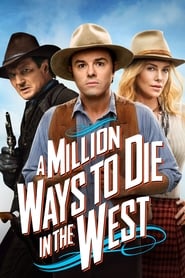 I want to preface this review by saying I've thoroughly enjoyed the previous work of writer/director and star, Seth MacFarlane. However, such a warning is about as pointless as someone who begins a rant by clarifying, "No offense, but ... ", because what's sure to follow any such introduction is clearly an offensive remark. And by now I'm sure you can rationalize exactly where I stand on A Million Ways to Die in the West, MacFarlane's anticipated follow-up to the 2012 comedy hit, Ted. Simply stated, it's an excruciating two-hour experience.

Albert (MacFarlane) is a cowardly sheep farmer who falls into depression after his long-time girlfriend dumps him for a wealthier and more courageous man. But once the druthers of frontier living in 1882 push him to the brink of trekking to California in search of a new life, a mysterious woman named Anna (Chalize Theron) arrives in town. The head-scratching duo form an unlikely bond as Anna helps Albert overcome his cowardly ways.

Seth MacFarlane has never been one for tasteful humor, and the trend continues with his latest work. In fact, with A Million Ways to Die in the West, you begin to wonder if MacFarlane has any sense of humor at all. I've been a lifelong fan of his hit animated show, Family Guy, and a supporter of the computer-generated comedy, Ted. That's why, even after witnessing the awful theatrical trailer for his newest release, I still ventured off to the movie theatre to give his film a fair assessment. If only I could turn back time, keep my $10.50 and relive those precious 2 hours of my life that I sadly lost.

My first general assumption was a cloudy skepticism that MacFarlane might not be able to act. Sure he's had an illustrious career as a comedic writer, but taking center stage is a completely different animal. But to his credit, MacFarlane actually performed quite well in the feature alongside the extremely talented and always stunning, Charlize Theron. Surprisingly, the biggest issues with A Million Ways to Die in the West revolve around a generic, overused template of a love story and a lack of substantial laughs. The film's first joke also happens to be its funniest, which remains all too fitting for a comedic blunder such as this.

As if misguided humor and a regurgitated story aren't bad enough, MacFarlane then decides to outstretch his laugh-less farce of a film to nearly two full hours. And what begins as a summer comedy flop, turns into an unbearable never-ending plea for the feature's closing credits. Seth MacFarlane's A Million Ways to Die in the West was supposed to be one of this blockbuster season's biggest hopefuls, unfortunately it's one you'll want to avoid at all costs.