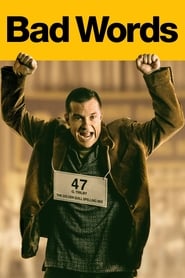 The actor-turned-director transition is one that many performers desire to accomplish. Sometimes the flow from onscreen star to behind the camera visionary is smooth and sleek. Clint Eastwood, Ron Howard and Ben Affleck are just a few shining examples of this evolution's success. On the other hand, actors such as Nicolas Cage (Sonny) and William Shatner (Star Trek V: The Final Frontier) discovered that the conversion can be quite challenging. In fact, when it comes to a familiar star taking the reins and jumping into the director's chair for the first time, you never really know what to expect. And that's the major source of intrigue surrounding Jason Bateman's major motion picture directorial debut, Bad Words.

Guy Trilby (Bateman) is a middle-aged man who uses the fact that he never completed any schooling past the 8th grade as a loophole to infiltrate the world of competitive spelling. While the parents of these studious and ambitiously committed youth see him as a dark cloud over the entire process, Guy has a mysterious motivation to his dastardly antics. That is, until a young Indian-American boy named Chaitanya (Rohan Chand) attempts to befriend the foul-mouthed and middle-aged competitor.

Despite the film's healthy dose of comedy, Bateman's Bad Words contains a flimsy script and glossed over characters. The leading star and director is serviceable in both regards, but all of the movie's characters are under-developed and one-dimensional. Bad Words offers no rooting interest and feels like a (very) poor man's Bad Santa. Bateman and company attempt to wrap a large layer of crude and R-rated humor around an ineffective and purposeless story. Bad Words is actually too simple and safe from a structural standpoint. Perhaps taking more risks and adding a blend of uniqueness could have given the film more to offer. Consequently, the audience is left with a slow moving journey to a mysteriously big reveal that isn't very shocking or exciting. All of which help identify Bad Words as the mediocre effort it so clearly is.

Jason Bateman's character, Guy Trilby, is intentionally straight-faced. His motives and emotions are meant to be unidentifiable, making it difficult to connect with the clean-canvased character. Therefore, the only remaining personae to latch on to is the Indian-American boy Chaitanya, played by youngster Rohan Chand. The child-actor has proven his abilities in Adam Sandler's Jack and Jill and 2013's late year success, Lone Survivor. Rohan continues raising the bar with a heartwarming performance that also demonstrates the boy's knack for comedic timing. However, the lovable-kid aspect can only carry the film so far and Bad Words ultimately suffers from countless other shortcomings.

In this early-year lull, the options are few and far between. Jason Bateman's Bad Words is easy to sit through, but nothing spectacular. If you're in search of some vulgar R-rated jokes in the vein of Bad Santa, you guaranteed to find some laughs and get your fix here. Otherwise, Bad Words is simply a run of the mill comedy with weak characters and an uneventful storyline.