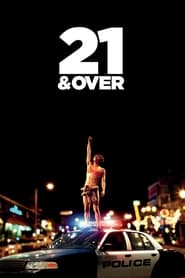 First-time directors Jon Lucas and Scott Moore are anything but amateurs. Best known as being the writers of the smash hit comedy The Hangover, the duo have written a fair share of other well known comedies such as The Change-Up and Ghosts of Girlfriends Past. But this time out, Lucas and Moore have settled comfortably into their director chairs for this weekend's release 21 and Over. Unfortunately for the screenwriters and directors, 21 & Over is far from genius of The Hangover.

Jeff Chang (played by Justin Chon) seemingly has it all. Attending an Ivy League school and fast on the path to becoming a doctor, Chang's best friends from high school, Miller and Casey (played by Miles Teller and Skylar Austin), pay him a surprise visit on his 21st birthday. Refusing to go out because of an important medical school exam the next morning, Miller won't take "no" for an answer. What's suppose to begin as an innocent night out turns into a wild tale of obscene debauchery.

Attempting to recapture the glory from their part in the 2009 hit The Hangover, Jon Lucas and Scott Moore stir up a frothy beverage of a similar taste. In retrospect, there's far too many similarities between the pair's newest effort 21 & Over and their previous blackout blockbuster. Although the wolfpack's outrageous journeys have them retracing their steps from a forgotten evening, Chang's drunken and indistinguishable sounds leave his best friends on a quest to remember where he lives. Following the smallest of clues possible, the trio embark on an uncontrollable night of humiliation and embarrassment. While 21 & Over has no shortage of laughs, the jokes are unoriginal and extremely short-lived. In addition to a lack of well written humor, the movie relies on the most over-the-top situations imaginable to elicit laughter from the audience. Shock-humor has become the latest craze and its flavor has quickly soured. Therefore, 21 & Over becomes just another example of ineffective modern day comedies.

Although no one will confuse 21 & Over for anything other than the comedy that it is, Lucas and Moore force-feed a handful of dramatic subplots into their feature. Every instance of banter about "people changing" and "lost friendship" illustrate just how indecisive the entire final product feels. Lost somewhere within the story themselves, writers/directors Jon Lucas and Scott Moore fail to properly blend their dramatic themes with the film's immature and outlandish comedic aspects. Once again reiterating that 21 & Over is an unfortunate swing and miss.

If you can find joy in the simple and thoughtless shock-value that has imprisoned the genre of comedy over the past five years, then 21 & Over will be a suitable movie experience for you. However, I pine for the carefully crafted and well written jokes from earlier 21st century classics such as Wedding Crashers and The 40 Year Old Virgin. If you happen to feel the same way that I do, then you should definitely take a pass on Friday's release 21 & Over.