Review | Bleed for This
Search 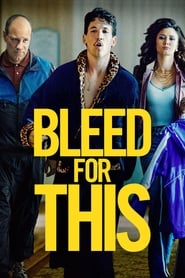 It isn't difficult to pinpoint the turning point in Miles Teller's young career. Fresh off a strong showing in the indie success, The Spectacular Now, Teller gained immense notoriety as the lead actor in the critically acclaimed Best Picture Nominee, Whiplash. And the artist isn't afraid to talk about one of his biggest influences in Hollywood, the great Robert De Niro. Therefore, when word broke of Teller's upcoming role in the true story of boxer Vinny Paz, it felt as if the youngster was longing for his Raging Bull moment. But let me be abundantly clear, Ben Younger's Bleed for This is no Raging Bull.

Despite struggling to cut weight throughout his career, Vinny Paz (Teller) eventually becomes the Middleweight Champion in 1991. But just as the fighter reaches the pinnacle of his success, Vinny's forced to relinquish his belt after suffering a broken neck in a near-fatal car accident. Against the doctor's wishes, Vinny continues secretly working out with his trainer, Kevin Rooney (Aaron Eckhart), in hopes of making a triumphant return to the ring and reclaiming his title.

Boxing films have always served as the perfect platform for the beloved underdog story, and Ben Younger's Bleed for This attempts to accomplish the same. Yet, while the life story of Vinny Paz is truly an inspiring one, a flawed screenplay and structure results in a disappointing translation to the big screen. It's no fault of co-stars Miles Teller and Aaron Eckhart, who both deliver fully committed and strong performances. However, the film's pivotal accident occurs too late in the story and resolves itself too quickly for the full effect to sink-in with the audience. Consequently, the aura surrounding Vinny Paz's comeback to the rink becomes watered-down and less uplifting than intended. Therefore, Bleed for This merely stands as a mediocre examination of a genuinely remarkable event in boxing history.