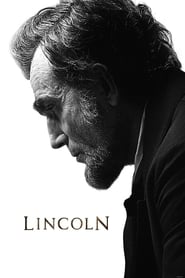 Throughout the history of mankind it has become an accepted fact that certain things belong together. Peanut butter and jelly, macaroni and cheese or the thought of Steven Spielberg and his newest baby, Lincoln. Even during War Horse's 2011 run to the Oscars, it was the anticipation of Spielberg's Lincoln that sat in the forefront of everyone's mind. With Daniel Day-Lewis, who I confidently refer to as "the greatest actor alive", signed on to portray the semi-controversial historic hero Abraham Lincoln, the possibilities seemed endless. Now, as 2012's stealth-like conclusion wanders within the eye's reach, Steven Spielberg's Lincoln is finally here. And it's about time.

Set during the closing months of the Civil War in 1865, Lincoln examines the personal and political struggles that our nation's 16th president endured while working to pass an amendment to the constitution to forever ban slavery. However, the confederate army becomes open to the idea of a peaceful immediate conclusion to the war. But if the confederate states rejoin the union before the house's vote on abolishing slavery, it would surely put an end to the passing of the amendment. As a result, President Abraham Lincoln (played by Daniel Day-Lewis) faces grave inner turmoil and guilt over allowing a deadly war to continue at the hands of freeing millions of black slaves.

Let me preface by saying that I am by no means a historian, and nor do I pretend to be. When I offer up my opinion on director Steven Spielberg's Lincoln, I am viewing the film in a cinematic context only. Historical debates aside, Lincoln is a deeply effective and fundamentally involved character study. In many ways feeling quite different from his typical style, Spielberg's biopic is very restrained and genuine. He never allows the movie to get too over-dramatic or flashy, instead giving the reins to two-time Academy Award Winner Daniel Day-Lewis who aptly carries the film for 149 minutes. To say that Day-Lewis is a spitting image of our former president, is to put it all too lightly. The infallible actor completely encompasses the aura of our nation's historical hero. Scene after scene, Day-Lewis astonishes with hair-raising performances that will surely land him a gaudy-sounding fifth Best Lead Actor nomination from the Academy. Outstanding acting is far from the only glowing aspect of Spielberg's Lincoln. Strong collaborative efforts from costume & makeup as well as beautiful cinematography join together to make the feature a clear technological achievement. From top to bottom, Lincoln succeeds as a carefully crafted molding of countless notable attributes.

If there is one major downfall to Lincoln, it resides in the enormous running time that can't help but wear down the audience. Ironically, Spielberg's film proves to be a massively draining viewing experience for the moviegoer. Much like the feature's hero who battles to balance a violent war and the passing of a landmark amendment, the audience leaves the theatre feeling as run down and feeble as President Lincoln does. To a fault, Spielberg force feeds a myriad of characters which helps to keep the runtime bloated. Some more pivotal to the story than others, the result is a culmination of subplots galore that manage to overtake Lincoln and hold the film hostage. Although it has become a recurring theme with the legendary director, Spielberg ends up as his own biggest obstacle. I can only imagine the difficulty for an accomplished director of his talents to constantly re-invent the wheel. However, his visions of perfection have often hindered his finished products of late.

Despite Lincoln's prolonged running time and stagnant feel, Steven Spielberg addresses this prominent historical figure with such precision and delicacy. You can tell the director's passion for the project by the manner in which the film unfolds. He allows for Daniel Day-Lewis to shine and, for once, plays second fiddle. Day-Lewis and a supporting cast that is unquestionably headlined by Tommy Lee Jones help elevate Lincoln to a credible piece of cinematic art. However, this is by no means a ringing endorsement for Spielberg's latest effort. Instead, take this as a nod of approval for fans of period pieces, biopics and the always great Daniel Day-Lewis.