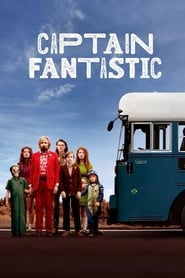 There's nothing better than going into a movie blind and being caught completely off guard by its effectiveness. Matt Ross (best known as Gavin Belson from HBO's Silicon Valley) writes and directs the indie gem and Cannes Film Festival prize-winning, Captain Fantastic. Ross emerges from this work as a true artist to watch, all while Captain Fantastic shines brightly as one of 2016's finest movies of the year.

Nestled deep in the woods of the Pacific Northwest, a devoted father (Viggo Mortensen) raises his children off the grid and secluded from civilization. Teaching all of the psychical tools required to hunt and survive, as well as cerebral critical thinking skills that allow the children to formulate their own opinions, the family is forced to leave their paradise after the unexpected death of their mother. Reconnecting with modern-day living tests the family and raises questions as to whether their father is helping or hindering their personal growth.

Captain Fantastic's lead character, Ben, lives the type of life that, deep down, we all long for to some degree. Completely self sufficient and free from the worries of the world, selling the audience on this far-fetched family lifestyle is an extremely difficult task. However, a detailed screenplay and brilliant performances by the entire cast transform this unrealistic backdrop into a believable plot catalyst. The obstacles and burdens on this family make for a dramatic, yet charmingly funny, experience. Captain Fantastic is a thought-provoking film that delivers a winning story and top notch performances. But these aren't the only strengths of the movie, Matt Ross offers exceptional direction for a rather inexperienced filmmaker. Although Captain Fantastic may have benefited greater from a few deeper and more emotional subplots concerning the children, in addition to cutting the running time down to improve pacing, these shortcomings hardly inhibit the film from being one of 2016's best entries.