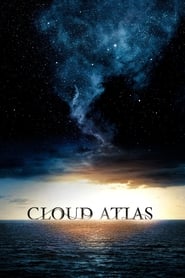 One of the highlights of this year's Philadelphia Film Festival came in the form of Tom Tykwer and the Wachowski's epic sci-fi adventure Cloud Atlas. Based on David Mitchell's award winning book of the same name, Cloud Atlas attempts to interconnect the entire past, present and future of human civilizations by weaving together multiple stories that span over six different centuries. In doing so, the trio of directors inherently offer a somewhat jumbled mess of concepts and ideas. But what a beautiful mess it is.

The best way to describe Cloud Atlas is to parallel it to a puzzle box. You see this complete and beautiful "big picture" that is pristine in every way imaginable. Each color delightfully complementing the other and the idea so flawlessly captured, it's just ... perfect.  But similar to the movie, you open the box and the perfection is broken up into pieces scattered everywhere. Each of these pieces waiting patiently for you to put them in their proper order, waiting to serve their purpose to the bigger picture. Cloud Atlas is an enormous six-movies-in-one journey, it's a puzzle. And for that reason, Cloud Atlas deserves every tiniest bit of your viewing attention. I firmly believe that it's a story so grandiose that it's virtually impossible to dissect and piece together the puzzle in only one viewing. And also for that reason, it not only becomes one of the most polarizing films in recent memory, but Cloud Atlas becomes a cine-phile's dream project. One that I proudly accept. You can be assured that I plan on watching the remarkable two hour and 43 minute journey many times in my future.

As creatively profound and visually groundbreaking as Cloud Atlas is, the film is by all accounts mightily flawed. But sometimes blemishes can give off a large sense of character, and that holds true with this feature. I recall leaving the theatre somewhat perplexed by what transpired on screen and thinking to myself "there was no emotional punch, there was no shining moment". And for a film of this magnitude, that type of impact is essential. For this reason alone, Cloud Atlas becomes an understandably displeasing adventure for much of its audience. However, lack of comprehension often leads to massive disappointment in all different kinds of art forms. I tried my hardest to look past this glaring fault and to place my focus solely on Tykwer and the Wachowski's message of an interconnected history of humanity. Recollecting the film in this light, I can honestly say that Cloud Atlas is one of the most fascinating movies I have ever had the pleasure of seeing.

To truly appreciate the entirety of Cloud Atlas, you must first be consumed by each of its stories on their own. The film does a remarkable job of giving an absorbent amount of life to all of the different stories and making them feel extremely unique and disjoint, yet so entwined to a larger agenda. And while none of the feature's long list of stars particularly stand out (except the underrated Jim Broadbent), Cloud Atlas and its numerous plot lines still serve their purpose and prove to be quite effective. Not only do the stories leave enough clues to unravel the mystery behind Cloud Atlas, they're exceptionally entertaining and they help you to ease your way through the lengthy sounding duration.

Trapped inside of Cloud Atlas is a beautiful picture waiting to be pieced together. With the appropriate amount of time and effort, it can be. Be warned, Cloud Atlas is definitely not a movie for everyone. It requires all of a viewer's attention and it demands a level of focus and thought that far exceeds the average Hollywood release. Therefore, we should both love and hate Tom Tykwer and the Wachowski's for this ambitious piece of work. If you're up for the challenge, there's plenty of greatness hiding inside of Cloud Atlas. If not, please move along.