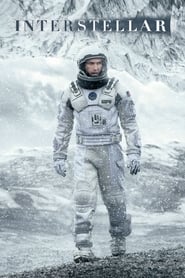 Just as though his latest endeavor proposes, Christopher Nolan, the fearless filmmaker, has never shied away from pushing boundaries and venturing into the unknown. Love him or hate him, Nolan commands respect for the monumental standards he sets for himself and filmmakers all across the globe. And with today's official release of the writer/director's newest sci-fi adventure, Interstellar, Nolan has tackled his most ambitious feature yet.

Earth is dying. With corn as their last main source of food, violent dust storms sweep across the world effecting humanity's fresh air supply and compromising their chance of future existence. Former NASA pilot turned farmer Cooper (played by Matthew McConaughey) is led to the doorstep of a NASA revival facility and tasked with one very difficult decision. Either remain on Earth to wither away with his two children, Murph and Tom, or lead a team of scientists on a journey to the furthest reaches of outer space in order to find a new home for the human race.

Running at nearly a three hour clip, Nolan does a fantastic job of maneuvering his science-fueled story in countless directions in order to keep the film engaging for audiences. At the heart of Interstellar is a wonderful father/daughter story, but equally impressive are Nolan's suitably timed sub-plots that come and go throughout the feature. Nolan plants plenty of surprises and twists along the way that generate thought-provoking ideas of blind heroism vs. the natural human instinct of survival. In context they're all brilliantly handled and brought to the surface by a barrage of spectacular performances from leading star Matthew McConaughey all the way down to a brief cameo from Matt Damon. Although I'm skeptical that any of these performances will garner the level of recognition that they probably deserve, Interstellar would be a far less effective film without the exceptional work of McConaughey, Anne Hatheway and many others.

One honest downside to the film is the head-spinning scientific dialogue that runs rampant throughout the script. It's so prevalent that I wish I had watched a few more episodes of Through the Wormhole with Morgan Freeman or brushed up on my Neil deGrasse Tyson reading. However, Nolan has enough self-awareness to recognize his ambitious goals and refuses to deliver a thought-less account of space travel, even if a large amount of the content will soar over the typical moviegoer's head. But all in all, Interstellar overcomes its head-scratching immersion in science lingo to take the audience on a multi-dimensional journey, both literally and figuratively, that's nothing short of mesmerizing.

While it becomes much easier to point out and criticize plot holes regarding the film's "bootstrap paradox" than it is to create a captivating, nearly three hour, science-supported action adventure, I'd say that this round definitely goes to Nolan. Admittedly, in many ways Interstellar is a far from Nolan's most taut or complete feature, especially with a polarizing and mind-blowing third act that's guaranteed to summon its fair share of detractors. Yet, it can't be denied that Interstellar is a visually immaculate ride that should be savored for a multitude of reasons. And much like the environmentally battered civilization his film introduces us to, I hope that Nolan continues to remain unafraid to "go gentle into that good night".