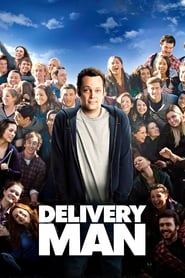 Stealing creativity from all over the world and remaking it with an American twist is nothing new to Hollywood. Beloved films like The Departed, The Ring and Scent of a Woman are just a few of the many foreign remakes that we've enjoyed over the years. Yet, in 2013 we've added a little spice to the mix with Vince Vaughn's latest blockbuster, Delivery Man. Because rather than simply adapting from the successful 2011 foreign film, Starbuck, Disney and Dreamworks went even one step further by securing the same director for the project, Ken Scott. The result is an almost line for line and scene for scene carbon copy of the original.

David Wozniak (Vaughn) is a middle-aged deadbeat with zero order in his life. But after a surprise visit from a stranger breaks the news that David's previously donated super-sperm has been mishandled and used to impregnate over 500 woman, his life is turned upside down. He enlists the help of his best friend and lawyer, Brett (Chris Pratt), to guide him through the decision of whether or not to break the confidentiality agreement and reveal himself to these now full-grown children who seek the identity of their biological father.

Delivery Man, the latest comedy starring Vince Vaughn, is both short on laughs and drowned in sentiment. The feel-good film attempts to win over audiences with a gentle blend of PG-13 humor and Vaughn's trademark slacker charm, however that cupboard has been empty for quite some time. It's been eight years since the energetic and fast-talking actor raised the comedy bar with a hilarious turn in Wedding Crashers, and each subsequent release continues to pull him further and further from that historic peak. Despite Vaughn's grandest efforts, Delivery Man is nothing more than an average collection of situational jokes with blatant tugs at the heartstrings. As a whole the dramatic effort is futile and unconvincing, making director Ken Scott's second go around with the story completely unwarranted.

For as irritating as it is to sit through conveniently placed plot builders, Delivery Manscratches its way to the finish line with the occasional comedic highlight. Although Vince Vaughn isn't nearly as funny as he used to be, the always hysterical Chris Pratt picks up the slack as frequently as possible. However, since Vaughn undoubtedly dominates the screen time, the film mainly rests on his shoulders and he never puts it all together. Surely there are moments within Delivery Man, they're just too few and far between.

With plenty of other fish in the sea, you're better off spending your time and money on a more enjoyable and authentic new release such as Richard Curtis' About Time. Delivery Man feels like a movie made simply for profit instead of the sincere dramatic-comedy we all expect. Unless you know that you'll swoon over the film's positive family-first message, there's plenty of reasons to look elsewhere.