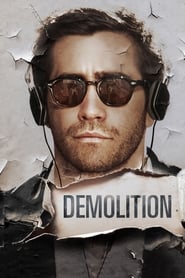 Canadian filmmaker Jean-Marc Vallee has always managed to produce quality movies while somehow flying under the mainstream radar. Even with the overwhelming success of his Best Picture Nominee, Dallas Buyers Club, and immediately following it up with the winning effort, Wild, Vallee still fails to stand as a household name. Either way, I've been a longtime admirer of the director's work and I was puzzled to learn late in 2016 that his latest project, Demolition, would have its release date pushed back to April. How could an Oscar-caliber filmmaker settle for an uncharacteristic early year release? Unfortunately, the proof is in the pudding.

Jake Gyllenhaal stars as Davis, a successful investment banker who ended up marrying the boss's daughter and working his way up the chain of command. However, when an unforeseen accident claims the life of his wife, Davis begins penning deeply personal letters to a vending machine company that robbed him of 5 quarters. Through an interesting relationship between him an a customer service representative (Naomi Watts) fascinated by his letters, Davis quickly discovers that in order to build his life back up again, he must first tear it down completely.

Demolition is another artistic effort from a brilliant filmmaker. And with a renowned talent such as Jake Gyllenhaal on board, you would expect something far greater than this jumbled mess. The film begins extremely well and Gyllenhaal's performance strong enough to allow the audience to wrap its arms around an overly wealthy and otherwise unappealing figure. Even the build up and introduction of Naomi Watts's sidekick character works well within the framework of the film. Yet, once her onscreen degenerate son, Chris (Judah Lewis), starts commanding screen time, Demolitionslowly starts to crumble. I can't say that youngster Judah Lewis is unequipped to deliver a worthwhile performance. Instead, I'll put the brunt of the blame on a sloppy screenplay that's unfocused and only minimally effective when all is said and done.