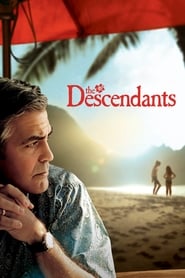 As the Closing Night feature at this year's Philadelphia Film Festival, The Descendants was easily the most anticipated film throughout the two week affair. Director Alexander Payne, most remembered for his Academy Award Nominee Sideways, is never quick to commit to a film. It's been a long awaited 7 years since his previous work, and genuine fans of cinema can't wait to feast their eyes on his latest project. Payne has put all his eggs in the basket of George Clooney. As the film's only big name star, you wonder if Clooney can handle the pressure.

The Descendants tells the story of Matt King (played by Clooney), a backup parent who is forced to take the reigns of his family after a boating accident has left his wife in a coma. After receiving news that she will never regain consciousness, doctors inform Matt that they'll be honoring her last will and testament and remove her from life support. Upon gathering his two daughters Alexandra (played by Woodley) and Scottie, Matt struggles to bond with his children over this tragic event.

The Descendants proves to be another successful piece of work for its director Alexander Payne. Despite its lone star George Clooney, the film is brilliantly acted by its entire cast. The movie serves as a constant reminder of the old adage "the whole is greater than the sum of its parts". Once again Clooney gives an Oscar worthy performance, but perhaps it's his co-star, Shailene Woodley, who proves to be most memorable. With a resume including almost nothing more than the television show The Secret Life of the American Teenager, Woodley's remarkable on screen effort makes her a dark horse for a Best Supporting Actress nod. Along with Woodley and Clooney, the entire cast feeds off of each other very well and it translates into a pleasant viewing experience.

Although the film offers terrific acting, The Descendants does have its fair share of issues. The pacing is tolerable, but occasionally it delivers a scene that doesn't seem to fit. These brief, but noticeable, moments will leave you scratching your head. Furthermore, for being a director who is widely known for interweaving drama with comedy, Payne hardly masters this difficult balance. Rather than having them complement one another, the movie manages to separate these two qualities. As a result, The Descendants succeeds as a comedy, but struggles to do the same as a drama. Its laughable moments will certainly resonate and capture the true essence of the film. On the other hand, its prolonged stretches of dramatic scenes allow for the feature to lose its flare.

As a whole, The Descendants is a solid motion picture. It proves to be a strong script and a moving story. Therefore, if you're looking for a modest, yet enjoyable, film, The Descendants fits the bill. But if you're expecting the world's next masterpiece, then expect to be let down.