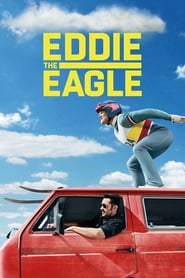 Full disclosure, I passed on an advanced screening of Eddie the Eagle because of my complete lack of interest in the film's trailer. Another hokey sports film was the last thing I was looking forward to at the moment, but impressive critical reviews forced me to reconsider. And honestly, I'm grateful for giving Dexter Fletcher's comedy a chance.

Growing up with physical limitations never stopped Eddie Edwards (Kingsman's Taron Egerton) from believing he'd compete at the Olympic games one day. And well into his lifelong pursuit, he finally discovered an above average ability to ski. Eddie soon discovers that England doesn't have a ski jumper and goes to insane measures to weasel his way into sports history during the 1988 Winter Olympics.

Leading star, Taron Egerton, won me over with a wonderful turn in the 2015 action-comedy, Kingsman, but he takes an even greater step forward with a transformative title role in Eddie the Eagle. With an energetic 80s vibe that goes far beyond the costume design and a fantastic score, courtesy of Matthew Margeson, the film does a remarkable job of drawing you into Eddie's outrageous destiny. Supporting star, Hugh Jackman, has his highs and lows throughout the movie but ultimately wins the audience over by the finale as well. Eddie the Eagle is surprisingly fun and effectively moving with its comedy-laced underdog story. Walking out of the theater will make you want to search for old footage of the 1988 Winter Olympics to relive the journey of this anti-athlete who captured the world's heart. Eddie the Eagle is far from sports movie immortality, but it's a delightful and engaging crowd-pleaser in its own right.