Review | Everybody Wants Some!!
Search 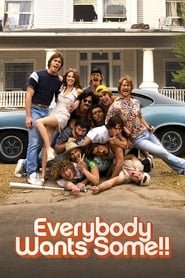 Richard Linklater is a bit of a chameleon director. His filmography boasts an assortment of movies which, on the surface, appear to have no link whatsoever. Yet, when you dig deeper into the content of films such as Boyhood, Dazed and Confusedand the Before Sunrise trilogy, they all share a common theme of self discovery. And the same can be said for Linklater's latest comedic endeavor, Everybody Wants Some!!.

Set throughout a Texas college in 1980, the film follows a new class of freshman baseball recruits who arrive to campus and meet their rowdy elder teammates a few days before classes begin. Pitching prospect, Jake (Blake Jenner), and his meat-head catcher, Plummer (Temple Baker), blindly follow the wisdom of their upperclassman teammate, Finn (Glen Powell), as they come face to face with newfound freedoms and adult responsibilities.

One of Richard Linklater's finest qualities as a filmmaker is his ability to capture moments. Much liked his influential cult classic, Dazed and Confused, this 80s centric comedy beautifully ushers its characters from uninhibited youthful independence to the early seeds of adulthood. Everybody Wants Some!! succeeds on the shoulders of subtly insightful scenes that are peppered with outrageous laughs and tender moments. Lead actor, Blake Jenner, delivers an endearing role that in no way steals the show. Instead, Linklater relies on a spanning cast of animated characters that each contribute key elements to the greater good. Supporting stars Temple Baker, who shines in a debut performance, and Glen Powell each handle their prominent roles with natural ease. An exceptional cast, solid soundtrack and energetic pace help make Everybody Wants Some!! a memorable experience.

While Richard Linklater's newest entry will understandably be compared against his beloved title, Dazed and Confused, it's important to recognize that Everybody Wants Some!! is mildly derivative of the previous work. 22 Jump Street's Wyatt Russell serves as a stand-in of sorts for Matthew McConaughey's classic Wooderson character. The similarities extend far beyond their physical resemblances, mainly Willoughby's prophetic preaching to ignore society's rules and to embrace your inner goofball. In addition to the comparable aspects of Linklater's two films, Everybody Wants Some!! suffers from an aimless story. It's a bit of a catch 22, but the director's passion for capturing key moments, in lieu of telling a cohesive story, ultimately weakens the film from a macro standpoint.

Despite the film's shortcomings, its appealing vibe and infectious energy are enough to sway the audience. I'm not envisioning a generational classic, but Everybody Wants Some!! is an affable winner in its own right. Considering it's only April, Linklater's latest is one of the better options worth enjoying early in 2016.