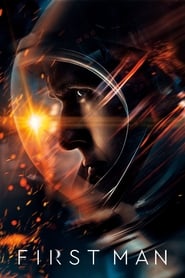 Caught in the midst of a time when truth no longer feels singular, America has brought forth a generation of skeptical individuals taught to question everything they’ve been told to believe. And what were once widely disregarded conspiracy theories, such as the legitimacy of the moon landing, have suddenly transformed into a more populist norm. Yet, no matter the resistance in which his film is sure to encounter, 2017’s Oscar-winning director, Damien Chazelle, mirrors a fearlessness to that of legendary astronaut Neil Armstrong, the centerpiece of Chazelle’s latest Oscar-destined drama, First man. It’s an ambitious effort, one cloaked in raw emotion and an often dark tone that feels moons away from his previous achievement, La La Land. But still, Chazelle cements his elite directorial status with another sharply-captured and deeply personal experience.

First Man opens in 1961, where the United States continues to lag behind the Soviets in the race to space. Fast forward a few years and a uniquely qualified candidate, Neil Armstrong (Ryan Gosling), applies to NASA with hopes of joining their efforts in beating the Soviets to the moon. And as the space program slowly breaks through barriers in its seemingly impossible quest for reaching the lunar surface, the stakes get higher and higher, forcing these astronauts to risk everything in order to achieve the unimaginable. 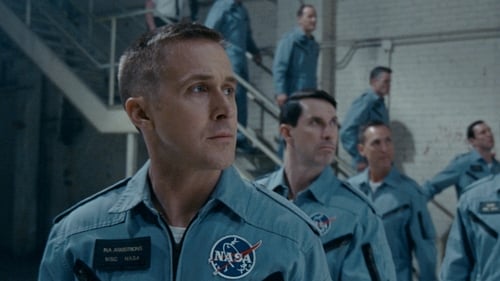 Damien Chazelle has already shown a knack for greatness with his first pair of feature films, Best Picture Nominees Whiplash and La La Land. And while this latest work isn’t quite up to their standards, it’s still a worthwhile film in its own right. First Man digs to the core of Armstrong and truly searches for the origins of his bravery and determination. It’s an intimate journey, one that becomes much easier thanks to Ryan Gosling’s heavyweight performance. It’s quiet but heavy, tempered but explosive, and everything you’d expect from a Best Actor Nominee, one that I clearly envision happening. Likewise, his onscreen counterpart Claire Foy delivers a meteoric turn as Armstrong’s bedrock of a wife. And unlike her internalizing husband, Foy’s character isn’t afraid to speak her mind and put her unmistakable strong-will on display. She’s the one left sitting at home, worlds away, glued to her radio listening to NASA’s direct feed of Neil’s missions. Doom and gloom run rampant throughout First Man, so you shouldn’t expect a shiny or uplifting tale of heroism. Instead, Chazelle recognizes that daring journeys into the unknown require immense sacrifices, and the director dwells on this notion rather than turn a blind eye to it. Consequently, this theme becomes a true staple of the film as First Man forces its audiences to remember the many people, in all facets of life, who gave everything for the greater good. And for that, Mr. Chazelle, we salute you.