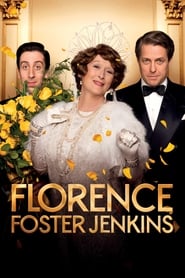 It isn't always a desire, but it's definitely a requirement. Every year I'm obligated to watch any movie involved in the major categories at the Academy Awards. Rumors have been swirling around the Oscars' most recognized star, Meryl Streep, garnering her unprecedented 20th nomination for her work in Florence Foster Jenkins. Therefore, I forced to sit through one of 2016's most overrated and underwhelming films.

Streep stars as the wealthy New York heiress, Florence Foster Jenkins, who dreams of being a beloved Opera singer, regardless of her dreadful voice. While her husband (Hugh Grant) and fellow upscale friends encourage her unfitting goals with dishonest praises of her vocal talents, mainly to keep the ill older woman in good spirits, things get out of hand when Florence decides to rent our Carnegie Hall and perform for thousands of listeners who aren't "in" on the secret.

Director Stephen Frears received immense recognition for his 2013 Oscar nominated feature, Philomena. Although I found that feature to be a little overrated as well, it isn't riddled with nearly as many flaws and miscues as his latest work. For a running time just shy of two hours, Florence Foster Jenkins offers shockingly superficial characters. Instead of developing characters that the audience can connect with, the film turns off the viewer with a story of true elitism, one that even finds Florence's husband threatening a newspaper for printing a poor review. The film offers little more than a bland story that's nowhere near as comical as advertised and mounting minutes of Florence's intolerable singing. Florence Foster Jenkins is a terrible investment of your time and energy, In fact, it would be virtually unforgivable for the Academy to honor Meryl Streep's middling performance in the film. Hopefully, they'll look past her seemingly "automatic" status and award the nomination to a new (or familiar) face who truly deserves the recognition.