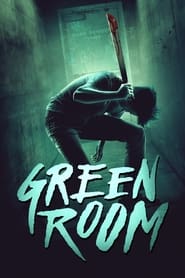 After skipping out on Jeremy Saulnier's debut revenge thriller, Blue Ruin, during the 2013 Philadelphia Film Festival, I immediately regretted the decision and put the movie near the top of my must-see list at the 2014 Sundance Film Festival. Blue Ruinwas a slow burning and violent entry that proved you don't need a massive budget to mesmerize audiences. Therefore, I can assure you that I was first in line for Saulnier's follow-up thriller, Green Room.

Set in the backwoods of the Pacific Northwest, a hardcore punk rock band, The Ain't Rights, find themselves in the midst of an unsuccessful tour. Broke and tired, they consider returning home until they're promised a solid payout at an impromptu gig held at a white supremacist venue. But after they finish up their set and return to the back room, they discover that a murder has been committed. As witnesses, they must fight for their own lives against a violent band of skin-heads.

Jeremy Saulnier provides relentless tension through the use of visceral violence and well-crafted situational horror. Once again, the director gives way to the stereotypical big-budget horror-thriller genre and creates a far more suspenseful atmosphere than those cookie-cutter cash cows we're typically given. Green Room unravels slow enough to give the audience time to connect with the characters all before a blood-shedding finale that includes some unforgettable moments. Anton Yelchin and Imogen Poots headline an effective B-list cast and Blue Ruin star, Macon Blair, re-teams with the director once again. The film's biggest weaknesses comes from a few noticeable plot-holes and conveniences that seem bitterly unrealistic. However, Green Roomdelivers no shortage of thrills and a fantastic closing line of dialogue that perfectly sums up the entire feature. Sometimes less is more and Saulnier has mastered that concept through the early stages of his career.