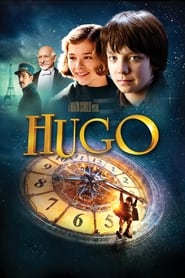 Martin Scorsese is performing a complete 180 on the phrase "family film". The acclaimed director, who typically spends his time making movies based on mob families, has set his sights on mastering the true essence of the PG rating. Scorsese begins a new chapter of his legacy with his latest work, Hugo. Truly a film suitable for the entire family, Scorsese delves outside of his comfort zone and into the hearts and minds of his viewers.

Set in 1930's Paris, Hugo follows an orphan child living inside the walls of the city's train station. After the passing of his father, young Hugo (played by Butterfield) allows Isabelle (played by Moretz) to assist him on an adventure to discover the mystery behind a broken machine which he possesses.

In an attempt to give as little away as possible, Scorsese's Hugo is a wondrous throwback to the origins of film. The director offers a delightfully crafted story that, on the surface, satisfies a younger audience. However, on a deeper level, Scorsese's work is intelligent and profound enough to captivate its adult viewers. What proves to be a perfect yet delicate balance, Hugo is a thrilling adventure and an exciting journey.

Once again, Scorsese does an excellent job of casting. One of Hugo's biggest strengths is the film's immensely talented cast. Who can argue the legendary career of the gifted Ben Kingsley? However, the performances of youngsters Asa Butterfield and Chloe Grace Moretz prove to be most memorable. They are an extraordinary pair of skillful actors and will continue to entertain for many years to come. Furthermore, Sacha Baron Cohen demonstrates he's more than just an off the wall actor. The Boratstar is sensational as the Station Inspector, a complex character straddling a thin line between stern and compassionate. All in all, Hugo's success is, in large part, due to its fine collection of actors and actresses.

Although the film's cast and script are wonderful, Hugo still has one small downside. With a runtime north of two hours, the movie contains a noticeable drag. Hugo's second act is drawn out and difficult to sit through at times, yet uncovering the story's mystery manages to help the audience push forward. And to its benefit, the film's resolution is well worth the wait.

I highly recommend Hugo to anyone looking for an enjoyable movie capable of entertaining the entire family. In addition, the picture is also a must see for any avid fans of cinema. Hugo offers a perfectly fitting score and exceptional cinematography. Scorsese and company recently were awarded Best Director and Best Picture by the NBR for their efforts in Hugo. The win is by no means shocking. For a delightful viewing experience, be sure to check out Hugo.