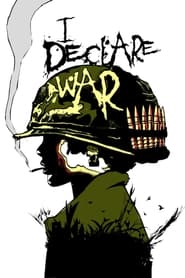 After watching a movie such as Jason Lapeyre and Robert Wilson's I Declare War, it's becomes extremely easy to remember all the reasons why I love independent movies. Having journeyed around the festival circuit for well over a year now, I Declare War is anything but your "average" film. Remarkably original and blissfully imaginative, you won't believe your eyes. And you shouldn't.

The rules have been laid out and the game is simple. Twelve child acquaintances embark on an adventurous and tactical game of capture the flag. PK (played by Gage Munroe) is the undefeated leader who finds his army pitted against Quinn, his untrustworthy soldier Skinner and a band of minions. But with individual agendas and vendettas coming to light throughout the battle, which side will win the war?

I Declare War feels like a very difficult film to get made these days. Yet, I'm grateful that it did. With no adult actors whatsoever and a child-filled vulgarity-fest, it seems like a difficult sell. But as a polar-opposite of the stereotypical big-budgeted action dreck that haunts me every summer, I Declare War is a fresh idea that proudly stands out from the rest. It's a movie that's brilliantly executed and superbly edited. There's an unbelievable amount of balance to the film. Tense yet witty. Genuine yet surreal. I Declare War delivers an ever-evolving tone that never feels out of place. It's a difficult and rare feat that filmmakers Jason Lapeyre and Robert Wilson perform with such ease.

While I thoroughly enjoyed enjoyed the film, I Declare War clearly isn't perfect. Its second act struggles to move the story forward and causes a sustainable lull. For boasting a running time barely north of 90 minutes, this little indie film really manages to drag on. However, some cleverly-crafted characters and a fantastically unique blend of reality verse imagination make for a constantly engaging movie experience. Outside of a few minor pacing issues and a couple weaker over-acted subplots, I Declare War represents another shining example of innovative independent filmmaking.

As an admitted harsh critic of action films, I Declare War is certainly one of the good ones. The special effects are limited and nothing is over-the-top. An original never-been-done story filled with wacky characters and an inescapable immature aura, I Declare War reminds us all just how thankful we should be for independent film.