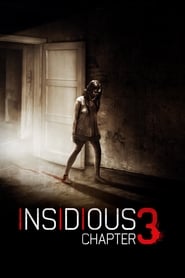 Horror guru James Wan, director of Saw and The Conjuring, introduced us to the franchise's origin, Insidious, back in 2010. A handful of years and two films later, Wan has jumped ship while the original creator, writer Leigh Whannell, has taken a seat in the director's chair. And how did Whannell expect to re-brand this horror franchise? The new visionary takes audiences back to where it all began with the prequel, Insidious: Chapter 3.

Before the Lambert family was even in the picture, gifted paranormal psychic, Elise Rainier (played by Lin Shaye), is visited by a high school teenager named Quinn (Stefanie Scott) who recently lost her mother to cancer. Together they call out to the dead only to discover a dangerous spirit attempting to attach itself to the young girl. Despite Elise's most emphatic demands to put an end to trying to contact her mother, Quinn finds herself in the clutches of an evil demon.

As someone who was outspokenly against the original Insidious, I decided to give the franchise another shot at redemption. Unfortunately, we're given more of the same. While Chapter 3 plays very well during its more intense moments and offers a strong collection of solid scares, every aspect of the film that takes place in between these frightful scenes is absolute garbage. Venturing deeper into "The Further" does nothing but weaken the effectiveness of the story and culminates into a laughable finale. Co-star Dermot Mulroney can't be taken seriously in any role and moviegoers need to start avoiding this unflattering horror franchise all together.