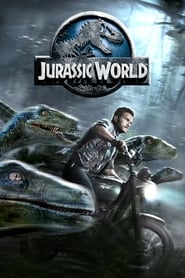 What do you get when you cross a visually lavish and iconic film franchise with one of Hollywood's fastest rising stars? A global money-printing success, that's what. Chris Pratt became an overnight sensation with the release of last summer's hilarious superhero adventure, Guardians of the Galaxy. And this year he tackles one of 2015's mightiest blockbusters, the highly anticipated sequel, Jurassic World.

Despite its tragic events from 22 years earlier, Isla Nublar is now home to the re-invented dinosaur theme park, Jurassic World. And while attendance has been plateauing for quite some time, the powers that be put their stock into a new genetically modified "asset" that's almost ready for its unveiling. Yet, as the park's operations manager, Claire Dearing (Bryce Dallas Howard), decides to unsuccessfully play host to her visiting nephews, this powerful creature breaks containment and goes on a murderous rampage. Claire looks to former military officer Owen Grady (Pratt) for help as they attempt to locate her nephews and take down the dangerous beast.

While it's virtually impossible to recapture the magnificence and originality of Steven Spielberg's 1993 classic, Jurassic World does a respectable job of providing top-notch special effects and a thrilling experience. It certainly feels as though director Colin Trevorrow is forced to sacrifice a small amount of substance for style, as the most spectacular aspects of the film come from its technical achievements. Yet, the action is adequately distributed throughout and tied together with charming humor at the hands of the talented Chris Pratt. While this role isn't as memorable as the star's performance in last year's Guardians of the Galaxy, it's still strong enough to carry an otherwise pedestrian film.

Jurassic World proves to be a flawed feature in many regards, which results in a disappointingly low ceiling. The entire subplot revolving around the InGen genetics company and Vincent Donofrio's "dinosaurs as a weapon" campaign is punishingly ineffective, Furthermore, the film is riddled with unlikely conveniences which are required to transition from scene to scene. I mean, I've never met a high school student capable of fixing up a car and getting it to run in a pinch and with a massive dinosaur on the loose. It's thoughtless writing such as this that crosses the line of reality and truly hampers Jurassic World. Thankfully, though, superb visual effects and an epic finale are just brilliant enough to overlook these distinct blemishes.

It's extremely difficult to view Jurassic World in the same light as the franchise's origin film. Nearly 22 years have passed since then and I was merely a child mesmerized by Steven Spielberg's majestic new world. And although I'm unsure if this upcoming wave of youth will remember Jurassic World how I remember its source material, I will say that Colin Trevorrow's film is a worthy addition to the franchise. Despite its many shortcomings, Jurassic World truly is a sight to see and guaranteed to be one of the summer's biggest blockbusters.