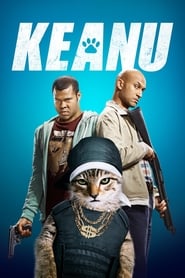 When news broke that Comedy Central had declined to renew the hilarious sketch comedy show from creators Key and Peele, I became immersed in the 5 stages of grief. But after witnessing their triumphant big screen debut last night, I've officially reached the stage of acceptance because I know there will be plenty of more laughs in their future. Lovers of the show can rest easy knowing that Keanu is every bit as hilarious and head-scratchingly insane as you would imagine.

Following a recent break-up, Rell (Jordan Peele) struggles with the rejection and hopelessness of his life. Yet, when an angelic little kitten literally arrives on his doorstep, Rell names the furry ball of cuteness Keanu and it rejuvenates his entire world. Meanwhile, suburbanite Clarence (Keegan-Michael Key), Rell's cousin, is granted a weekend alone from his wife in hopes of embracing his inner passions, so the relatives decide to enjoy a movie together. However, when they return to Rell's home, they discover that Keanu's been kidnapped and they're forced to wear their most hardcore faces as they hit the mean streets to find the feline.

Longtime Key & Peele director, Peter Atencio, re-teams with the duo in their film debut and the collaboration is wildly effective. Keanu succeeds on well-written and hysterically-acted situational comedy, an undeniable forte of the film's leading stars. Their fake gangster personas carry the 100-minute laugh-fest without ever growing tiresome. Key and Peele have the unique ability to take a simple idea and wring out more jokes than you ever thought possible, and those talents are on full display here. But in addition to the movie's large dose of hilarity, Atencio's direction is completely on point as well. We can only hope that this collaborative team will return again in short order and continue making worthwhile comedies for years to come.

In all honesty, though, Keanu does suffer from a few noticeable faults. The script is flooded with major conveniences and eye-popping plot holes that are used to progress the story, and it's these lazily written ideas that ultimately hinder the film from reaching legendary comedic heights. Furthermore, Keanu's finale is a bit muddled and in some ways thoughtlessly written as well. However, these less than impressive moments come and go quickly enough to become a distant memory as an onslaught of humor stands as the film's lasting memory.

Keanu is in no way groundbreaking or even a must-see comedy. Yet, the film is a pleasantly-paced and entertaining effort with an abundance of genuine laughs. Key and Peele are an extremely talented pair of writers and actors. This debut feature is a refreshing entry that should pave the way for future projects. And if they're anywhere as good as Keanu, we'll be be enjoying them for a long time.