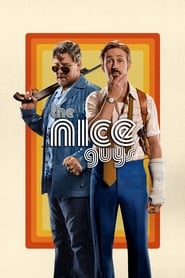 Considering Shane Black broke into the the industry as the writer of the 1987 buddy-cop comedy, Lethal Weapon, there's no surprise that he's returning to his roots for his third directorial effort, The Nice Guys. I've been on record speaking out against Black's previous entry as the visionary behind Iron Man 3, but I'm thrilled to see him transitioning back to a place of comfort. Black first stepped behind the camera for 2005's wildly acclaimed caper comedy, Kiss Kiss Bang Bang, and more than a decade has passed since, Yet, Black's able to rediscover his winning formula with a new pair of leading stars, Russell Crowe and Ryan Gosling.

The Nice Guys stands as a refreshing new buddy comedy that delivers well-earned and cleverly crafted jokes. There is no shortage of laugh out loud moments, all of which solidify Shane Black's latest film as a clear-cut winner. Gosling and Crowe have a natural chemistry that allows the humor to flow naturally. Their characters possess contrasting personalities that perfectly complement one another. Gosling as the clumsy and more unprofessional investigator, and Crowe as the brute muscle who operates under a strict unwritten code of the industry. In addition to a fine script that allows for the film's talented leads to work their comedic magic, The Nice Guys has another surprising talent emerge from all of its splendor. Normally the overuse of a teenage character can be a hindrance to a movie, yet Black brilliantly incorporates newcomer Angourie Rice into the story. As Holland March's daughter and voice of humanity in the film, Rice sets herself apart as a valuable asset. Each of these glowing attributes come together masterfully in one of 2016's finest efforts.

Although the film's laughter and light-heartedness keep a positive and energized tone throughout its duration, The Nice Guys does manage to struggle in a few key areas. The overall mystery of their case lacks depth and unpredictability. Furthermore, many of March and Healey's big breaks are discovered by luck and sheer chance. Black's work could have used a little more investigative wit to counterbalance all of the film's accomplished comedy. And finally, The Nice Guys merely skims over any dramatic elements that it introduces. As a result, the film's characters appear cartoon-ish and one dimensional. Perhaps a slightly deeper dive into their personal lives would have gone a long way. Instead, we're left with a hysterical caper comedy, but very little more.

Needless to say, Shane Black has another winner on his hands. Acceptable doses of action, mystery and hilariously scripted humor come together to deliver a wildly entertaining film. The Nice Guys doesn't break any barriers or demand a place on the Mount Rushmore of buddy comedies, but it definitely makes for a worthwhile movie experience. If your in need of some genuine laughs and an engaging couple of hours at the movies, then you certainly won't regret taking a chance on Shane Black's latest entry.