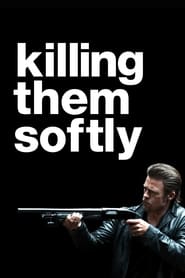 In 2007, writer and director Andrew Dominik teamed up with leading star Brad Pitt to offer the Oscar nominated western The Assassination of Jesse James by the Coward Robert Ford. The feature's critical praise helped solidify Dominik's status all throughout Hollywood. A handful of years later, the director and Pitt return with Killing Them Softly, a satirical look at capitalism's greedy impression on the current mob underworld. After receiving massive amounts of acclaim since its Cannes Film Festival premier in May, perhaps Killing Them Softly could be another Oscar-worthy effort from Dominik and Pitt? Not so fast.

When three unintelligent lowlifes decide to rob a protected Mob card game, the local criminal economy feels the repercussions. Through sheer stupidity on the part of one of the robbers, hitman Jackie Coogan (played by Brad Pitt) is brought in to take care of the culprits and restore proper order to the Mob.

To be perfectly honest, Killing Them Softly was one of my most anticipated releases of the year. Back in the Spring, early buzz out of Cannes managed to peak my interest and, knowing the Weinstein Company, I braced myself for a Fall release. After finally viewing the film, it's clear that Killing Them Softly is a tunnel-visioned examination of economic greed and its divisive consequences. But rather than quietly using executioner Jackie Coogan's story as an effective metaphor, Andrew Dominik wastes almost no time shoving his film's purpose directly into your face. As a result, Killing Them Softly feels more like a force fed political satire than a subtle piece of artistic beauty. By selling its soul and taking a satirical approach, Dominik attempts to deliver an off-beat and stylish dark comedy. Instead, the movie comes off as a cheap Coen brothers imitation with much weaker writing and far worse cinematography. As for any stylistic comparisons between Killing Them Softly and last year's surprise hit Drive, they are completely off base and offensively inaccurate. For as promising as the movie appears at a chopped up and edited glance via its trailer, Killing Them Softly is a mightily flawed viewing experience.

Despite my harsh criticisms and to be perfectly fair to Andrew Dominik, Killing Them Softly is a well intended and immensely thought out piece of work. Dominik's characters have depth and purpose to the story, which is always easier said than done. Brad Pitt is the true highlight of the film and he delivers another knockout performance. As someone who wasn't always an outspoken fan of Pitt, he has clearly won me over and his work here is just another fine example of why he's one of the best in the business. In addition to Pitt, James Gandolfini gives a valiant effort in his small supporting role. The former Soprano's star continues to struggle breaking out of his "Tony Soprano" label, but his work here is both heartfelt and genuine. Gandolfini's character oozes with emotion and instability and hopefully we get to see plenty more of the same from him in the future. As imperfect as it is, Killing Them Softly conjures up enough redeeming qualities to see you through the finish line.

In the end, disappointment reigns supreme in Andrew Dominik's long awaited return to the director's chair. With Killing Them Softly, top notch acting fails to salvage a mediocre script and a blatant in-your-face message. Unlike Dominik's The Assassination of Jesse James by the Coward Robert Ford, Killing Them Softly is far from the preconceived Oscar contender may of us believed it could be. Lacking in substance and memorable scenes, the film is a rather dull 97 minute experience. Unless you "have to" see it, I recommend taking a pass with Killing Them Softly. It's not what you'd expect ... in a bad way.