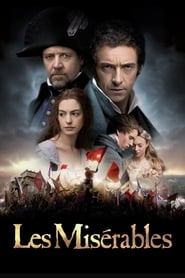 The last time director Tom Hooper gave us an Oscar contender, he ended up winning Best Director and Best Picture for 2010's The King Speech. This year, Hooper returns with a slightly more difficult task with his adaption of the Broadway musical Les Miserables. Attempting to revolutionize the way musicals are transformed into major motion pictures by filming the actors singing live on set, Hooper finds staunch competition from other major contenders such as Steven Spielberg's Lincoln and Kathryn Bigelow's Zero Dark Thirty. Now, having had a chance to finally see Les Miserables for myself, I sense its Oscar hopes dwindling.

Set throughout 19th-century France, Jean Valjean (played by Hugh Jackman) is a former prisoner who decides to break his parole in hopes of creating a new identity and devoting his life to god. Hunted for over a decade by an officer of the law named Javert (played by Russell Crowe), Valjean agrees to care for the child of a deathly-ill former factory worker named Fantine (played by Anne Hathaway). Desperate to put his past behind him, Valjean raises the young girl in seclusion and fear that Javert will eventually find him and reveal his true identity.

Rather than delivering a truly great film, Tom Hooper's Les Miserables feels more like a sporadic collection of great moments. As a longtime admitted fan of the Broadway musical, my anticipation for Hooper's interpretation of Victor Hugo's groundbreaking story couldn't be put into words. For starters, the director should be commended for his casting decisions of Anne Hathaway, Eddie Redmayne and Hugh Jackman. Without this heavily talented trio, Les Miserables could have been a huge disaster. Jackman serves as the film's leading star and performs the role of Jean Valjean admirably. Furthermore, fast-rising star Eddie Redmayne (My Week with Marilyn) astonishes and becomes a major saving grace in the second half of the feature. But when you hear about performances from Tom Hooper's Les Miserables, the most talked about role has been Anne Hathway's turn as Fantine. Many have declared Hathaway the frontrunner in the Best Supporting Actress race and, truth be told, she's every bit as good as advertised. In many ways, her character's onscreen death begins a steady decline in the overall project. In addition to Hooper's cast, the director gives a praiseworthy effort himself. Much different from seeing the musical on a stage, Hooper's in-your-face camera work allows the audience to experience the story in a completely original style. Through the inclusion of a stellar cast, innovative direction and convincing costumes and makeup, Les Miserables serves an enjoyable adaptation of the legendary Broadway musical.

Although Tom Hooper's Les Miserables is guaranteed to satisfy its hardcore fan-base, there are many obvious flaws in the film. First, the movie feels every bit as long as its two hour and 38 minute running time suggests. While viewing the feature, you begin to appreciate the lengthy intermission given to the Broadway musical. Never having an opportunity to break up the film, Les Miserables becomes a slow-paced affair that noticably weakens in its second half. Furthermore, many questions should be raised about Hooper's decision to cast both Russell Crowe and Amanda Seyfried. Crowe never really fits the role of Javert, and such an integral character demands a better performance. As for Seyfried's turn as Cosette, she makes it difficult to buy into the love at first sight romance between her and Eddie Redmayne's Marius. A crawling journey to the film's finale and some vital casting decisions prove that Les Miserables is nowhere near the Best Picture Oscar contender that many, including myself, envisioned.

I expect non-fans of musicals to find very little satisfaction in Tom Hooper's Les Miserables. The feature is intended to appease its already biased fan-base more so than the average moviegoer. Unless you are familiar with the musical or thoroughly motivated to see the movie, I would recommend taking a pass on Les Miserables.  And while Anne Hathaway should be reason enough to take a chance on the movie, her minimal amount of face time makes it a difficult argument to stand behind.