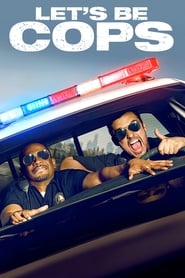 Back in April when I ran a Summer Preview series, one of the films I outlined was Luke Greenfield's law enforcement comedy, Let's Be Cops. Considering Greenfield was at the helm for a guilty pleasure of mine, 2004's The Girl Next Door, and I've always admired Jake Johnson's work, I figured that if Damon Wayans Jr. was even half as funny as his father, we could have the surprise comedy of the summer on our hands. Unfortunately, my initial thoughts were misguided and Let's Be Cops remains mired in mediocrity for a multitude of reasons.

Ryan (played by Johnson) and Justin (Wayans Jr.) are Ohio transplants struggling to find success in Los Angeles. And while Justin's passion project gets rejected by his boss at work and Ryan continues to dwell on his glory days as a college quarterback before he sustained a career-ending injury, the duo contemplate a return to their home state. However, a dim-witted mistake on Ryan's part finds the pair of friends dressed authentically as police officers, where they quickly discover an insatiable appetite for the power and respect that comes along with being a cop.

There are quite a few flaws peppered throughout the latest summer comedy, Let's Be Cops. Outside of its leading stars who deliver respectable performances given the circumstances, the feature is dowsed with ineffective secondary characters that offer nothing to the film. Rob Riggle leaps from the 21 Jump Street franchise to this easily comparable counterpart and fails to shine. The same can be said for Andy Garcia, Nina Dobrev, James D'Arcy and Comedy Central's Keegan-Michael Key. Then there's youngster Joshua Ormond, a worthless inclusion who manages to conveniently appear and disappear at any given moment. Also, for an R-rated comedy the jokes are merely molded out of vulgarity and male nudity, which mix together to form an almost laugh-less affair. And although the film begins with a playful examination circling the leading pair's seemingly harmless, yet punishable, offense, in the blink of an eye Let's Be Cops spins right off the realistic-meter and lands in the realm of unbelievable.

Despite the fact that driving on sidewalks appears to go unnoticed and the wanna-be cop tag-team are able to obtain expensive surveillance equipment from local law enforcement without raising suspicion, Let's Be Cops still manages to offer a handful of redeeming qualities. Jake Johnson is a bright spot who constantly demonstrates an innate ability to make a fluid transition between comedy and drama, to the point where it feels shockingly effortless. Furthermore, his chemistry with onscreen sidekick Damon Wayans Jr. is evident as The New Girl co-stars work undeniably well together.  Yet, as the minutes begin to mount and the film requires the audience to constantly suspend their disbelief, Let's Be Cops falls further and further into the class of forgettable buddy comedies.

Desperate to stack up against the recent successful 21 Jump Street franchise, this latest comedic effort lacks the creative humor and slick storytelling to stay in contention. Relying solely on f-bombs and other vulgar improv to muster up the laughs, Let's Be Cops marks another run-of-the-mill summer blockbuster that swings and misses. You're better off holding on to your hard earned money or looking elsewhere for a more reliable source of entertainment.